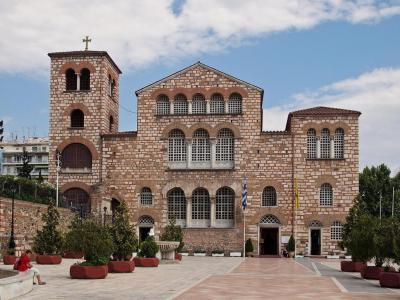 The Church of Saint Demetrius is the main sanctuary dedicated to the patron saint of Thessaloniki, dating from a time when it was the second largest city of the Byzantine Empire. It is part of the group of Palaeochristian and Byzantine Monuments of Thessaloniki added to the list of UNESCO World Heritage Sites in 1988. The basilica is famous for the six extant mosaic panels, dated to the period between the latest reconstruction and the inauguration of the Iconoclastic policies in AD 730. These mosaics are the rare examples of art survived the Dark Age following the death of Byzantine Emperor Justinian in AD 565. Archaeological excavations conducted in the 1930s and 1940s revealed interesting artifacts that may be seen in a museum situated inside the church's crypt.
Image by JFKennedy on Wikimedia under Creative Commons License.
Sight description based on wikipedia