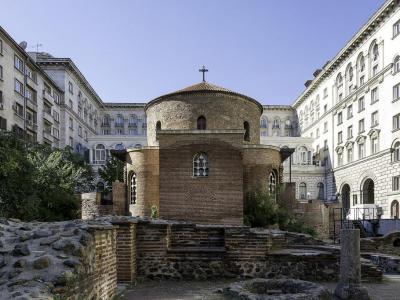 In a courtyard between the Sheraton Hotel and the Office of the President is a red brick rotunda from the 4th century. It was built as a Roman bath inside Serdica, the ancient capital of Dacia. The bath became an early Christian church and it now is a part of the Bulgarian Orthodox Church.

The building is domed and cylindrical on a square base. Inside are magnificent frescoes of the 12th, 13th, and 14th centuries. Layers of frescoes dating back to the 10th century have been uncovered. Portraits of 22 prophets, each six feet tall, line the dome. These treasures were painted over during the Ottoman era and discovered in the 20th century.

The dome is 45 feet above the floor. There are five layers of frescoes. The oldest is Roman-Byzantine with floral designs. Next is medieval Bulgarian with 10th century angels. Third is a frieze with prophets and scenes of the Assumption, Ascension, and more. Fourth holds a 14th century portrait of a bishop. Last of all is a scene of Islamic ornament.

On special occasions the church is a venue for military ceremonies and concerts featuring classical and religious music.
Image Courtesy of Wikimedia and Nikolai Karaneschev.