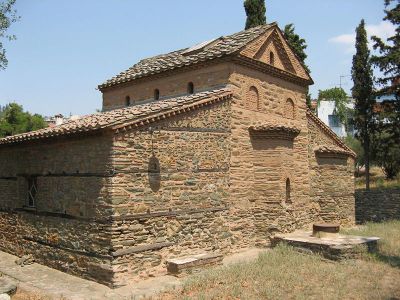 The Church of Saint Nicholas Orphanos is an early 14th-century Byzantine church.

The church's name, "Saint Nicholas the Orphan", is first attested in the 17th and 18th centuries, and presumably refers to its otherwise unknown ktetor (founder). From its interior decoration, the building is dated to the period 1310–1320. The church originally formed part of a monastery, traces of which (remnants of a gate) survive to the east.

The church was originally built as a simple, single-aisled edifice with a wooden gabled roof. Later, aisles were added on three sides. They form an ambulatory, under whose floor several graves have been found.

The church is most notable for its frescoes, contemporary with the church's construction, which cover almost the entire interior surface. The frescoes are an example of the Thessalonican school at the height of the "Palaiologan Renaissance", and their creator may be the same who decorated the Hilandar monastery in Mount Athos in 1314. The church has been linked to the Serbian king Stephen Uroš II Milutin, who is known to have sponsored churches in the city, on account of the depiction in the main aisle of St George Gorgos, the Serbian ruler's patron saint, and of St.
Image by Buchhändler on Wikimedia under Creative Commons License.
Sight description based on wikipedia