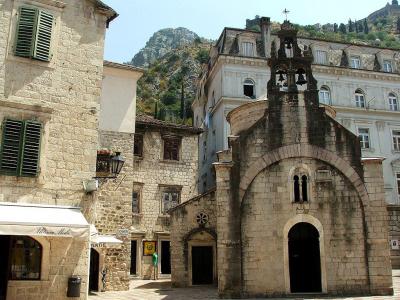 Saint Luke's is one of the oldest structures in Kotor. The small church, with its Roman and Byzantine architecture, is full of interesting history and artifacts.

It was first built in 1195 as a Catholic church. Some of the original 12th-century frescoes are still present. You can also see two lovely iconostases, one from the 17th century and one from the 18th.

From 1657 to 1812, it housed side-by-side Catholic and Orthodox altars, and the two faiths took turns holding services. It was then gifted to the Orthodox church. The church stands now as a testimony to the harmonious co-existence of the Orthodox and Catholic people.

The floor of the church is made from tomb panels. Until the 1930s, the burring of Kotor citizens was held in the church itself.

St. Luke's stands in Greca Square, immediately across from St. Nicholas's Church. The most notable thing about this church is its small stature--compared to the buildings around it, including the grand St. Nicholas', it looks tiny.

The building is one of the only structures in town not to have been damaged by earthquakes, including the most recent in 1979.
Image Courtesy of Wikimedia and Misa.stefanovic.07.

Want to visit this sight? Check out these Self-Guided Walking Tours in Kotor. Alternatively, you can download the mobile app "GPSmyCity: Walks in 1K+ Cities" from iTunes App Store or Google Play. The app turns your mobile device to a personal tour guide and it works offline, so no data plan is needed when traveling abroad.