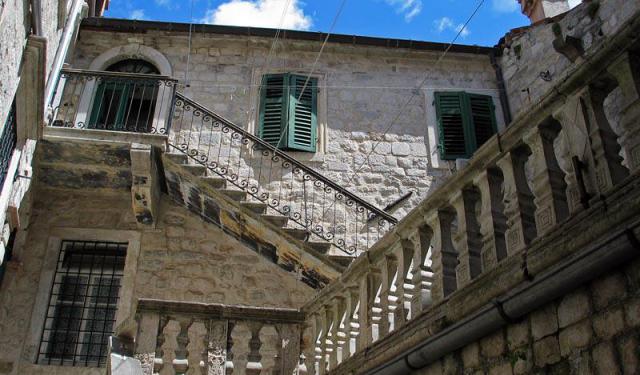 Image by Mikhail Perfilov on Flickr under Creative Commons License.

This magnificent historic city is home to a number of wonderful palaces. Many of these beautifully ornamented mansions belonged to wealthy and influential families. Visitors can trace the history of each building by looking at the coats of arms of noble families and the paintings on the walls. Take this self-guided tour to see these beautiful historical palaces in Kotor.
How it works: Download the app "GPSmyCity: Walks in 1K+ Cities" from iTunes App Store or Google Play to your mobile phone or tablet. The app turns your mobile device into a personal tour guide and its built-in GPS navigation functions guide you from one tour stop to next. The app works offline, so no data plan is needed when traveling abroad.

Located on Trg od Oruzja, the Bizanti Palace was first erected in the 14th Century. After the devastating earthquake of 1667, the palace was significantly reconstructed. Today the edifice represents a fine example of Renaissance architecture with elements of Baroque style. The building still bears the initials and coat of arms of one of its previous owners – Nikola Bizanti.
Image by Mikhail Perfilov on Flickr under Creative Commons License.
2

The Beskuca Palace dates from the mid-18th Century. Its famous portal is a masterpiece of floral Gothic architecture. It first belonged to the Beskucas, a noble family that gained their power through naval commerce. During the Austro-Hungarian Empire, the palace served as a courthouse. Nowadays, it's the property of city authorities.
Image by korom on Flickr under Creative Commons License.
3

Situated on Flour Square, this beautiful 17th Century palace stands out with its long Baroque balustrade. The building itself represents a fine example of Renaissance-Baroque architecture. Renovated after the 1979 earthquake, today the building houses a popular bar.
Image by Sailko on Wikimedia under Creative Commons License.
4

This palace was first erected in the 14th Century, but had to be renovated twice after earthquakes in 1667 and 1979. Decorated with dragons, the palace remains a good example of Gothic architecture. Nowadays, it houses the Regional Institute for Protection of Cultural Monuments.
Image by Igor under Creative Commons License.
5

Gregorina Palace is a beautiful Baroque edifice built in the 18th Century. Located in Boka Fleet Square, it is now the home of the Maritime Museum. Next to its entrance you will see two cannons which symbolize the endless battle between seamen and pirates.

The Maritime Museum of Montenegro in Kotor has grown out of the collection founded by the "Boka Marine" Fraternity, around the year 1880 and opened to public in 1900. It gradually enlarged and in 1938, it was re-arranged and opened to visitors on the first floor of the present Museum building. It was only after the end of World War II, in the period 1949-1952, that the whole building, Baroque palace of the noble Grgurina family from the beginning of the 18th century, was completely restored and adaptet to meet the needs of the Museum.

The disastrous earthquake of April 15,1979, caused halt in regular activities of the Museum, its building being considerably damaged. In the period from 1982 to 1984, conservation and restoration works were finished and after the five year period of renovation, the Museum continued its activities.

Image by young shanahan on Flickr under Creative Commons License.
6

The Lombardic Palace is another Kotor mansion that belonged to a wealthy family. Built in the 18th Century, this traditional three-story palace is located right next to the Church of Saint Luke. Visitors can get something to drink afterwards at the popular café nearby.
Image by korom on Flickr under Creative Commons License.
7

This 17th Century palace is located on Trg od Drva, next to the entrance to the St Ivan Fortress. The building is best known for its built-in symbol of the old Kotor's pharmacy, which was founded in the 14th Century.
Image by korom on Flickr under Creative Commons License.