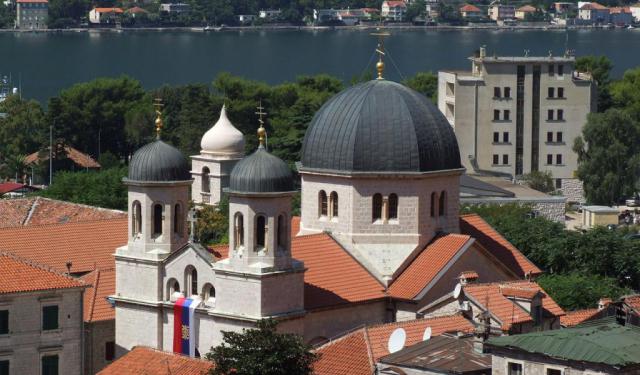 Image by Pudelek on Wikimedia under Creative Commons License.

Although Kotor is a small city, it is home to a surprising number of beautiful churches. Many of these buildings are decorated with amazing frescoes dating from as far back as the 14th Century. Take this self-guided walking tour to see the most impressive places of worship in the city.
How it works: Download the app "GPSmyCity: Walks in 1K+ Cities" from iTunes App Store or Google Play to your mobile phone or tablet. The app turns your mobile device into a personal tour guide and its built-in GPS navigation functions guide you from one tour stop to next. The app works offline, so no data plan is needed when traveling abroad.

Another one of the main squares of old town Kotor, Saint Tryphon's, is home to the Saint Tryphon Cathedral. Since it is one of the most impressive and imposing buildings in the city, it is also sometimes called the Kotor Cathedral.

The cathedral stands out in this historic city as it embodies the tumultuous past of the area. The site began in 809 when Venetian merchants brought artifacts back from Constantinople.

A local citizen built a church here for exhibiting the relics, and this church was mentioned in the writings of Byzantine Emperor Constantine VII Porphyrogenitus. Those writings were the only evidence of that first church until archaeological researchers found new evidence in 1987.

The cathedral was completed in 1166 and was built in the Romanesque and Byzantine styles. Like many of the structures in town, it was severely damaged by many earthquakes over the centuries. With each repair and restoration, the style of the building changed. Occasionally rebuilt would uncover elements of the original building.

It wasn't until the 1979 earthquake that the building was reconstructed to preserve the original 1166 structure.

Inside, a Ciborium from 1362 dominates the cathedral. You'll also see many paintings from medieval times. There is also a reliquary that has many relics from the 15th through the 18th centuries.

There are other important structures located on the square in front of the cathedral, as well. The Bishop Palace was the official residence of the bishops and is located adjacent to the cathedral. It was owned by the noble family Drago, whose palace is also on the square.


Image by Christine McIntosh on Flickr under Creative Commons License.
2

The Church of St. Michael was erected on the site of a former Benedictine monastery at the end of the 14th Century. As well as admiring the building itself, visitors can also see a collection of stone monuments inside the church.
Image by Richard Mortel on Flickr under Creative Commons License.
3

Even though its Byzantine styling makes it look much older, the Church of Saint Nicholas was built from 1902 to 1909. It was built to replace an 1810 church that existed on the same site but was destroyed by fire in 1896. Before that, the site was occupied by a 16th-century monastery.

Saint Nicholas is a Serbian Orthodox congregation. The Serbian flag hangs over the main entrance.

The building is framed by two large bell towers with black domes. Atop the domes are gold crosses that were a gift from Russia.

The church's interior is adorned with an impressive collection of beautiful silver pieces, from candle holders to impressive chandeliers. The iconostasis was made by the Czech painter Frantisek Ziegler in 1908.

Despite these embellishments, the church is relatively unadorned, as is the custom in Orthodox churches. The plain grey walls capture light from simple stained glass panels, which create a calming and mystical effect.
Image by Richard Mortel on Flickr under Creative Commons License.
5

Saint Luke's is one of the oldest structures in Kotor. The small church, with its Roman and Byzantine architecture, is full of interesting history and artifacts.

It was first built in 1195 as a Catholic church. Some of the original 12th-century frescoes are still present. You can also see two lovely iconostases, one from the 17th century and one from the 18th.

From 1657 to 1812, it housed side-by-side Catholic and Orthodox altars, and the two faiths took turns holding services. It was then gifted to the Orthodox church. The church stands now as a testimony to the harmonious co-existence of the Orthodox and Catholic people.

The floor of the church is made from tomb panels. Until the 1930s, the burring of Kotor citizens was held in the church itself.

St. Luke's stands in Greca Square, immediately across from St. Nicholas's Church. The most notable thing about this church is its small stature--compared to the buildings around it, including the grand St. Nicholas', it looks tiny.

The building is one of the only structures in town not to have been damaged by earthquakes, including the most recent in 1979.
Image by Misa.stefanovic.07 on Wikimedia under Creative Commons License.
6

The Church of St. Ozana was built on the site of an ancient Christina Episcopal basilica in the early 13th Century. Its structure represents a fine example of Romanesque architecture. Visitors here will also get the chance to see the relics of St. Ozana, which are housed inside.
Image by Igor under Creative Commons License.