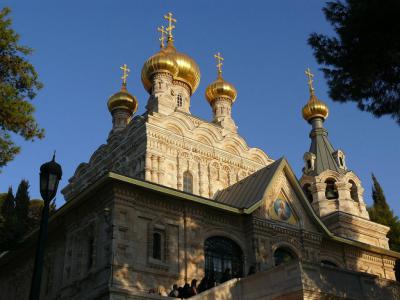 In the 1880s, Tsar Alexander III had this Russian Orthodox church raised in memory of his mother, Empress Maria Alexandrovna (known before her marriage as Princess Marie of Hesse and by Rhine) who died before his second birthday. Set amid trees, its seven gilded onion domes, each topped by a tall golden cross, are among the most striking features of the skyline seen from the Old City. These and other architectural features are in 16th- to 17th-century Muscovite style. The interior has several murals that depict the life of Mary Magdalene, the first recorded witness of Christ's resurrection.

Completely in harmony with the entourage, St. Mary Magdalene's is a striking contrast to others in Jerusalem and is worth looking out for when scanning the Mount of Olives. To this day it is the final resting place for Grand Duchess Elizabeth Feodorovna of Russia who was martyred along with her fellow nun, Varvara Yakovleva, during the Bolshevik Revolution in 1917. Also buried here is Princess Alice of Battenberg, responsible for harboring Jews when the Nazis occupied her country, in order to help keep them alive.