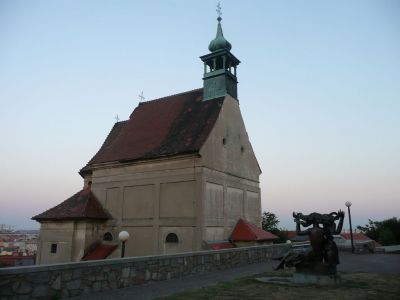 Built in 1661, the Church of St. Nicholas was erected by Countess Frances Khuen, the widow of Count Paul Pálffy. Located next to world renowned Bratislava Castle, the structure is built in the early Baroque architectural style with a hint of Gothic bravura. The Baroque style was supported by the Jesuit order of the Roman Catholic Church during the 17th century. Common to this type of architecture, the church has expansive naves and vivid lighting. Visitors to the building are greeted by a stone statue of St. Nicholas, the patron saint of fishermen and sailors of the Roman Catholic Church, who is located in the stone niche above the entrance of the building. Just like the municipality where it is located, the church has been influenced by the people of diverse nations and religions like the Austrians, Germans, Hungarians, Slovaks and the Czechs. Up until the 1900s, St. Nicholas’ Church was administered by the Roman Catholic Church. Presently, the facility serves the Orthodox Church. The extravagant altar is recognized throughout the community of academic experts of Baroque architecture as one of the best examples of this time period. The incredible angels at the top of the altar were created by the renowned artist Paul of Levoca.
Image by XpucmoSK on Wikimedia under Creative Commons License.