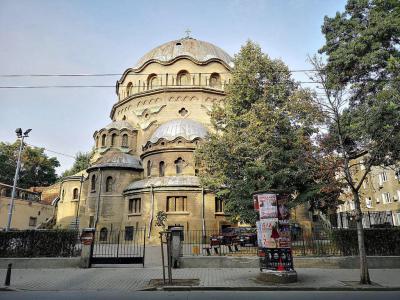 The Church of St Paraskeva is a Bulgarian Orthodox church in Sofia. The church, dedicated to Saint Paraskeva, is located on 58 Georgi Rakovski Street in the centre of the city. It is the third-largest church in Sofia.

Plans to build a church at the site date to 1910, when Stuttgart-educated Bulgarian architect Anton Tornyov won a competition for the church's design. Due to the Balkan Wars and World War I, however, the construction was postponed. In 1922, the church board of trustees announced another competition, which was again won by Tornyov. The construction of the Church of St Paraskeva was complete by 1930, but the finishing works on the porticos did not cease until 1940.

St Paraskeva has a somewhat unusual design for an Eastern Orthodox church: for example, the cella is in practice a round chamber over 20 metres (66 ft) in diameter. The cella gradually disintegrates into the surrounding apses.
Image by Biso on Wikimedia under Creative Commons License.
Sight description based on wikipedia