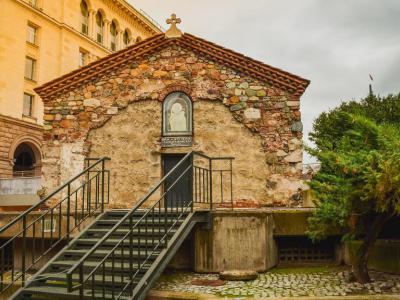 Church of St Petka of the Saddlers, Sofia

In the center of the city of Sofia, half-buried at a TZUM subway stop, there is a little church. It has but one nave in a cylindrical vault and a hemispherical apse. The walls are of brick and stone and three feet thick. This is the church of Saint Petka of the Saddlers.

Saint Petka or Parascheva of the Balkans was an ascetic woman of the 11th century. She was born on the shores of the Sea of Marmara. She led an austere life and died in Constantinople at the age of 27. There are two other saints with her name. There is Saint Paraschevi of Rome, a 2nd century martyr, and Saint Paraskevi of Iconium.

There is confusion about these three saints and some pre-Christian slavic deities. However the little church of Saint Petka in Sofia is dedicated to Saint Petka of the Balkans.

The church is labeled "of the Saddlers" because in the Middle Ages, Saint Petka was the patron saint of saddlemakers who lived nearby. The church was small since by Ottoman law at that time, no church could be higher than an ordinary house.

The most impressive feature of the church are the murals inside. They show mainly Biblical scenes painted at different times. There are murals from the 14th, 15th, and 16th centuries.

Vasil Levski, the great revolutionary hero of Bulgaria, is believed to have been buried in the crypt of Saint Petka's. No clear evidence of this has been found, but the legend persists. Church hours are Monday to Sunday from 7:30 am to 7:30 pm.
Image Courtesy of Flickr and Sami C.