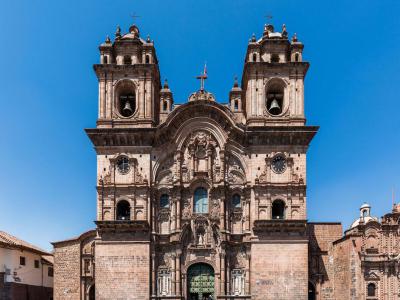 Church of the Company of Jesus, Cusco (must see)

During construction on the Church of the Company of Jesus in 1571, the Jesuits, who were building it, decided that it should be the most magnificent church in Cusco. The archbishop of Cusco argued that it should not be allowed to compete with the splendor of the cathedral, and the conflict became so heated that Pope Paul III was called on to deliberate over the matter and give a verdict. By the time the message had reached the pope in Europe and his decision reached South America, the Iglesia de la Compania de Jesus was almost complete, which is why it has such an ornate frontal facade.
Image Courtesy of Wikimedia and Diego Delso.
Sight description based on Wikipedia.

Want to visit this sight? Check out these Self-Guided Walking Tours in Cusco. Alternatively, you can download the mobile app "GPSmyCity: Walks in 1K+ Cities" from iTunes App Store or Google Play. The app turns your mobile device to a personal tour guide and it works offline, so no data plan is needed when traveling abroad.