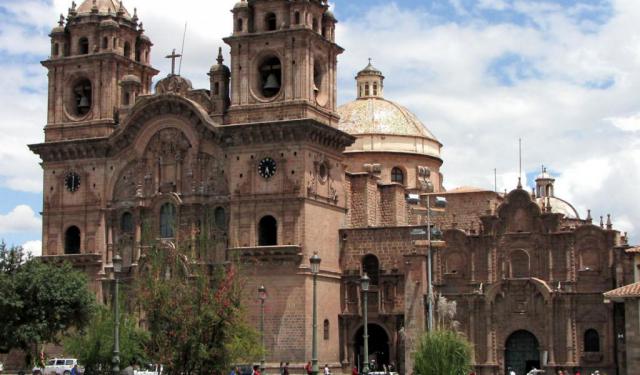 Cusco, once the capital of the Inca Empire, is one of the oldest cities in the world. In the 16th century Spanish missionaries brought Catholicism to Cusco. Take this self-guided walking tour to learn about fascinating Inca religious rituals and see the beautiful religious art in Cusco's Colonial-era churches.
Image Courtesy of Wikimedia and D. Gordon E. Robertson.
How it works: Download the app "GPSmyCity: Walks in 1K+ Cities" from iTunes App Store or Google Play to your mobile phone or tablet. The app turns your mobile device into a personal tour guide and its built-in GPS navigation functions guide you from one tour stop to next. The app works offline, so no data plan is needed when traveling abroad.

The Cusco Cathedral is part of Cusco's UNESCO World Heritage Site. The Spanish built the Cusco Cathedral between 1560 and 1654. The Roman Catholic church is Main Square's most impressive building. It has a Spanish colonial style and is home to significant colonial artworks as well as archeological finds.

The Cusco Cathedral replaced an Inca temple and was built on the temple's foundations. Many of the cathedral's stones are from the Sacsayhuamán citadel on the northern outskirts of the city. The Spanish also used the square's sacred sand in the construction. The Cusco Cathedral features a classic colonial Gothic-Renaissance style. The Spanish used conquered residents as their labor, and included some Inca symbols in the cathedral, such as the carved jaguar head on the doors.

The cathedral's north tower features the remarkable Maria Angola Bell. The bell was cast in 1659, is 2.15 meters (seven feet) high, and weighs over 13,000 pounds. The bell was named after an Angola enslaved person who added gold to the crucible when the bell was created. The bell is audible up to 20 miles away but is only rung for special occasions.

Visitors will find a collection of Peruvian painter Marcos Zapata's paintings in the sacristy. A highlight of Zapata's paintings is the fascinating "The Last Supper" showing Jesus and his disciples eating traditional Peruvian dishes such as guinea pig and and drinking chicha. Zapata was born in Cusco and was known for introducing local elements in his paintings.

In addition, the cathedral hosts portraits of Cusco's bishops. The cathedral also displays works from the Cusco School of Art. The wooden Christ of the Earthquakes crucifix is tarnished with centuries of candle smoke. The crucifix is taken outdoors during Holy Week to commemorate the 1650 earthquake.

2) Church of the Company of Jesus

The Church of the Company of Jesus was built on an Inca palace. Jesuits began construction on the church in 1576. The church features Spanish Baroque architecture. Its beautiful architecture influenced many other buildings later on.

The church was damaged during the 1650 earthquake and rebuilt in 1668. The church has ornate exterior and interior embellishments, such as a dramatic portal and exquisite altarpieces. The nearby Cusco Cathedral's leaders became concerned about the church's attractive features and wanted the church to tone it down so the cathedral could remain Cusco's most magnificent landmark. Pope Paul III was asked to intervene. However, his support of the cathedral didn't reach Cusco until the Church of the Company of Jesus was completed.

3) The Church of Triumph

The Church of Triumph was built in 1536, just three years after the conquistadors settled in Cusco. At one point, presumably between 1533 and 1536, the Spanish were cornered by a besieging army of Incas, led by Manko Inka. Just as it seemed that they were on the verge of defeat, the Spanish miraculously managed to drive back the Incas. The Catholic conquistadors attributed this victory to Saint James who was reported at the time to have descended from heaven to drive back the Quechua Incas. This improbable victory is why the church is called the Church of Triumph and why there is a statue of St. James atop a horse within the church, depicting him slaying an Inca.
Sight description based on Wikipedia.
4

The Monastery of Saint Catherine is a monastery of nuns of the Domincan Second Order, located in Arequipa. It was built in 1580 and was enlarged in the 17th century. The over 20,000-square-meter monastery was built predominantly in the Mudéjar style, and is characterized by its vividly painted walls. There are approximately 20 nuns currently living in the northern corner of the complex; the rest of the monastery is open to the public.

The foundress of the monastery was a rich widow, Maria de Guzman. The tradition of the time indicated that the second son or daughter of a family would enter a life of service in the Church, and the monastery accepted only women from upper class Spanish families. Each family paid a dowry at their daughter's admission to the monastery. The dowry expected of a woman who wished to enter as a choir nun-indicated by wearing a black veil—and who thereby accepted the duty of the daily recitation of the Divine Office, was 2,400 silver coins, equivalent to about $150,000 (U.S.) today. The nuns were also required to bring 25 listed items, including a statue, a painting, a lamp and clothes. The wealthiest nuns may have brought fine English china and silk curtains and rugs. Although it was possible for poorer nuns to enter the convent without paying a dowry. At its height,the monastery housed approximately 450 people (about a third of them nuns and the rest servants) in a cloistered community.
Image Courtesy of Wikimedia and Diego Delso.
Sight description based on Wikipedia.
5

5) Coricancha and Convent of Santo Domingo (must see)

The Coricancha, "Golden Temple" or sometimes "Temple of the Sun," was the most important temple in the Inca Empire. Unfortunately, most of the temple was destroyed by Spanish conquistadors, but the remaining stonework was used to make the foundation of the Santo Domingo Convent.

You'll notice many variations of spelling used for "Coricancha" since there is no single agreed-upon English spelling. A few alternatives that you'll see include Qorikancha and Koricancha.

The Inca used ashlar masonry to construct Coricancha. This alone is a testament to the building's importance since ashlar is labor intensive and requires the use of only perfectly faced and squared stones.

At one time, the walls of Coricancha were covered in gold, and the courtyards were filled with gold statues. The Spanish described the opulence as "fabulous beyond belief." In 1533, the Spanish demanded a gold ransom for the Inca leader Atahualpa's life. Most of the gold came from Coricancha. A nearby archaeological museum has a collection of mummies, idols, and textiles from the site.

The Spanish eventually built the Convent of Santo Domingo on the site. Some of the stones from Coricancha were used for the foundation, and others found their way into other churches around town.

The convent was the first Dominican convent in Peru. It was founded in 1534, and the first building was completed in 1610. Unfortunately, a severe earthquake caused an earlier structure to collapse completely.

The building you see today was built in 1680. The baroque bell tower was added in the early 1700s. The museum here is divided into four areas: the Coricancha, the Cusco School, a contemporary art collection, and a collection of work collected by the convent to recognize modern works made in the city of Cusco.
Image Courtesy of Wikimedia and Diego Delso.
6

La Merced Church was originally built in 1536, but it underwent restoration work at the end of the 17th century. Its beautiful facade, the Gonzalo Pizarro crypt, the former prison of Salamanca and the courtyard carvings that depict the life of the Merced Order members attract many tourists to La Merced. The church's valuable collection of statues, carvings, paintings and other religious art can be viewed in the museum of the church.
Image Courtesy of Flickr and gringaespanola.
7

Santa Clara Monastery was founded by women of the Franciscan Order in the mid-16th century. The church has survived multiple earthquakes and still retains some of its original Baroque features. The interior of the church is covered with mirrors, which were used in the Colonial era to attract native people to join in worship. Visit Santa Clara to learn about religious sacrifice and to see the harsh conditions nuns once endured.
Image Courtesy of Wikimedia and Lindaazucena00.
8

The church of San Francisco is a Franciscan church built in the city of Cusco. The southern part of Huacaypata was built, which at that time extended to what is now Plaza San Francisco . It is located on the south side of Plaza San Francisco, in the center of the city, together with the premises of the Colegio Ciencias .

Since 1972, the property has been part of the Monumental Zone of Cusco, declared a Historic Monument of Peru. Also, in 1983, being part of the historic center of the city of Cusco, it is part of the central area declared by UNESCO as Cultural Heritage of Humanity .

The structure of the temple stands out for its simplicity compared to the other churches in Cusco . It has a single tower with 7 bells, among which is the second largest in the entire city. It has the shape of a Latin cross and three basilica -type naves . Inside, the high choir carved in cedar stands out in 1652 by the friars Luis Montes, Isidro Fernández Inca and Antonio de Paz. That choir contains the images of 93 saints of the Catholic Church .

In the basements of the building are the crypts that housed human remains, since this temple also served as a cemetery.

The Romanesque style stands out on the outside of the temple and the Plateresque style on its front .

Next to the church is the convent of the order that originally consisted of 4 cloisters. The first comprises the chapter house and the sacristy. The second was used - and still is - as the premises of the Colegio San Buenaventura (today Colegio San Francisco de Asís ) and which briefly housed the Colegio Educandas in the mid- 19th century . The third corresponds to the novitiate and the fourth was destroyed after being ceded to the Peruvian government to house the Colegio Ciencias , land it occupies to this day.

Inside the convent, the enormous canvas called "Genealogy of the Franciscan order" is exhibited, which measures 12 meters high by 9 meters wide and was painted by Juan Espinoza de los Monteros in 1699.