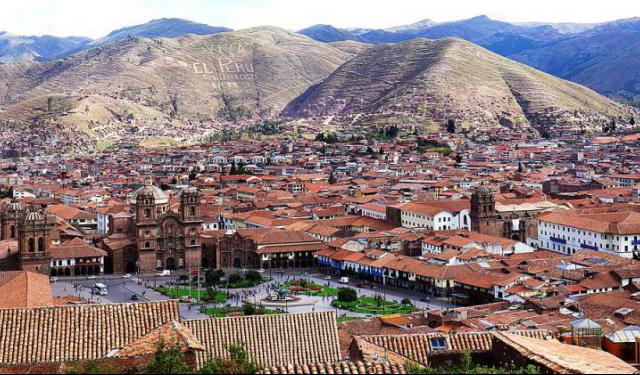 Image by Martin St-Amant on Wikimedia under Creative Commons License.

The rich historical legacy of Cusco is known well beyond the city's borders. The streets of the capital of the once mighty Inca Empire tell a fascinating story of life in the pre- and post-Columbus eras. This tour invites you to visit some of Cusco's most noteworthy attractions, prominent reminders of the city's eventful past.
How it works: Download the app "GPSmyCity: Walks in 1K+ Cities" from iTunes App Store or Google Play to your mobile phone or tablet. The app turns your mobile device into a personal tour guide and its built-in GPS navigation functions guide you from one tour stop to next. The app works offline, so no data plan is needed when traveling abroad.

Known as the "Square of the warrior" in the Inca era, this plaza has been the scene of several important events, such as the proclamation by Francisco Pizarro in the conquest of Cuzco. Similarly, the Plaza de Armas was the scene of the death of Túpac Amaru II, considered the indigenous leader of the resistance. The Spanish built stone arcades around the plaza which endure to this day. The main cathedral and the Church of La Compañía both open directly onto the plaza.
Image by Vicente González Camacho on Flickr under Creative Commons License.
Sight description based on wikipedia
2

Image by Emmanuel Dyan on Flickr under Creative Commons License.
Sight description based on wikipedia
3

3) Museum of Religious Art (must see)

The Museum of Religious Art is located near the center of the city in the historic Archiepiscopal Palace, which was built over the walls of the Inca Sinchi Roca Palace. During the Colonial era, the building belonged to Marquiz de Buenavista. Today, several rooms of this beautiful house are used to display a collection of religious art, Colonial furniture and paintings. This is one of the best places in Cusco to enjoy Andean art.
Image by Svadilfari on Flickr under Creative Commons License.
4

Visit the narrow pedestrian street Hatunrumiyoc, near Plaza de Armas, to view this marvelous Inca stone construction. The structure is in fact an old wall that was once part of the Inca Roca Palace. This masterful ‘Twelve-angled stone’ is a great example of what the Inca were capable of creating. A visit to this popular downtown area, packed with small shops, museums and bars, should definitely be Number 1 on your Cusco 'To Do' list.
Image by zieak on Flickr under Creative Commons License.
5

San Blas, also known as "the Artist’s District," is a popular downtown area. The narrow, picturesque streets here are packed with small art galleries, specialty shops and bars. Despite its popularity, you can still take a leisurely stroll in San Blas. Be sure not to miss San Blas Church, home of the legendary Pulpit of San Blas, one of the greatest jewels of Colonial religious art in South America.
Image by Veronique Debord on Flickr under Creative Commons License.
6

The Four Busts House, a great example of Spanish colonial architecture, was once the home Spanish conquistador Marquis Salas Valdez. The family coat of arms and four images of the home's owners are carved in stone on the outside of the house. The well-preserved family portraits on the exterior of the house once served to remind people walking by of the noble status of its inhabitants, as well as their Spanish heritage.
Image by Luis Siabala Valer on Flickr under Creative Commons License.
7

The Spanish colonists built the Church of Santo Domingo on the site, demolishing the temple and using its foundations for the cathedral. Construction took most of a century. This is one of numerous sites where the Spanish incorporated Inca stonework into the structure of a colonial building. Major earthquakes severely damaged the church, but the Inca stone walls, built out of huge, tightly-interlocking blocks of stone, still stand due to their sophisticated stone masonry.
Image by Edson Pedrassani on Wikimedia under Creative Commons License.
Sight description based on wikipedia
8

8) Church of the Company of Jesus (must see)

During construction on the Church of the Company of Jesus in 1571, the Jesuits, who were building it, decided that it should be the most magnificent church in Cusco. The archbishop of Cusco argued that it should not be allowed to compete with the splendor of the cathedral, and the conflict became so heated that Pope Paul III was called on to deliberate over the matter and give a verdict. By the time the message had reached the pope in Europe and his decision reached South America, the Iglesia de la Compania de Jesus was almost complete, which is why it has such an ornate frontal facade.
Image by Jethrothompson on Wikimedia under Creative Commons License.
Sight description based on wikipedia
9

La Merced Church was originally built in 1536, but it underwent restoration work at the end of the 17th century. Its beautiful facade, the Gonzalo Pizarro crypt, the former prison of Salamanca and the courtyard carvings that depict the life of the Merced Order members attract many tourists to La Merced. The church's valuable collection of statues, carvings, paintings and other religious art can be viewed in the museum of the church.
Image by Simenon on Flickr under Creative Commons License.
10

One of the most attractive museums in the city, The History Museum of Cusco is located in the former house of the famous local writer Garcilazo de la Vega. The museum is centrally located just a few blocks away from the city’s central plaza. Inside, the museum has preserved the building's decorative features and has on display a permanent collection of paintings of the Academy of Cusco, in addition to wooden sculptures and archeological pieces. These archeological artifacts include Inca pottery, agricultural tools, textiles and musical instruments.
Image by unforth on Flickr under Creative Commons License.
11