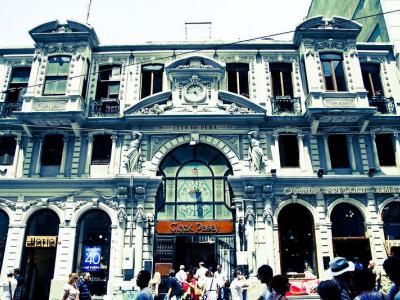 About halfway along Istiklal Caddesi, the famous modern avenue that starts from Taksim Square and leads to the edge of Galata, there are numerous "passages", or arcades – part covered and part free in the sun – abounding with shops and restaurants. The most famous of these, the Çiçek Pasajı, dates to 1876 and bears a particular history. At one time, in fact, it was one of the swankiest places in the city: built in direct imitation of Parisian models, it housed a shopping arcade and apartments. Following the Russian Revolution of 1917, many impoverished noble Russian women, including a Baroness, found themselves selling flowers here. By the 1940s the building was mostly occupied by flower shops, hence the present Turkish name: "Flower Passage".

Recently renovated, the place may have lost some of its past charms, but can still offer an experience you won't find anywhere else in Europe. It's a unique place to take a stroll, especially to admire the glass roof or the old signs and to poke around inside the many shops and "meyhanes" (taverns) serving seafood and traditional "raki", the local anise-based firewater (beginners are advised to dilute it with a copious amount of water if they plan to rise from the table unassisted).

A great way to mix with locals, the passage allows for outside seating even on cold and rainy days. At night, it is lit up with colorful lights and live musicians tableside.
Image by aylamillerntor on Flickr under Creative Commons License.