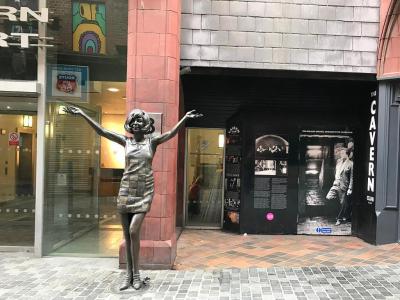 Her career is closely associated with the Beatles, as Lennon and McCartney wrote several of her hit songs, including singles "Anyone Who Had a Heart" and "You're My World", both of which reached number one in the UK in 1964. She had 11 top 10 hits on the UK Singles Chart between then and 1971, and an additional eight hits that made the top 40.

Black died on 1 August 2015 at the age of 72, after a fall in her villa in Estepona. This statue of Black was commissioned by her sons and unveiled in 2017 outside the original entrance of The Cavern Club where she started out her career.
Image Courtesy of Wikimedia and Jonathan Hutchins.
Sight description based on Wikipedia.