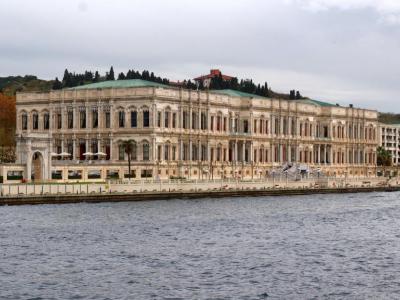 This former Ottoman palace located on the European shore of the Bosporus, between Beşiktaş and Ortaköy in Istanbul, was commissioned by Sultan Abdülâziz between 1863-67, during a period in which all Ottoman sultans built their own palaces rather than using those of their ancestors; Çırağan is the last example of this tradition. The inner walls and the roof were made of wood, the outer walls of colorful marble. A very high garden wall protects the palace from the outer world, and a beautiful marble bridge connects it to the Yıldız Palace on the hill behind.

During the Second Constitutional Monarchy, Sultan Mehmet V Reşat allowed the parliament to hold their meetings here. Only two months after, on January 19, 1910, a great fire destroyed the building, leaving only the outer walls intact. Called "Şeref Stadı", for many years it served as a football stadium for the club Beşiktaş J.K..

In 1989, the ruins were bought by a Japanese corporation, which restored the palace and added a modern hotel complex next to it. Today, it serves as luxury suites for the 5-star Kempinski hotel along with two of the city's best restaurants. The Sultan's Suite, billed at US$35,419 per night, was ranked #14 on World's 15 most expensive hotel suites compiled by in 2012.
Image Courtesy of Flickr and Alexxx Malev.