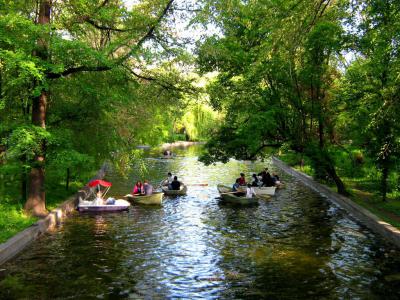 Cişmigiu Gardens is a public park dating back to the times when Bucharest was still the capital of Wallachia Principality. Established in 1847, this is the oldest and largest (17 hectares) green space in the city.

The park was laid out on a site formerly known as "Lake of Dura the Merchant", or simply Dura, a popular fishing ground from as early as the 17th century. Part of the present-day gardens was occupied by vineyard, planted around a water source.

The decision to replace the lake was taken in 1846, during a period of Imperial Russian administration, and was based on an earlier proposal made by Russian governor, Pavel Kiselyov, in 1830. The actual plan for the park was formulated in 1844, prior to which, in 1843, Prince Gheorghe Bibescu had called on experts in horticulture and landscaping to partake in restructuring the Dura area. Subsequently, the German horticulturist Wilhelm Friedrich Carl Meyer and his assistant, gardener Franz Hörer, answered the call and arrived in Bucharest.

Under their supervision, by 1851, new species of trees had been brought in including chestnuts from Gorj County, walnuts from Dâmboviţa County, and other plants from places like Vienna and Braşov. At the same time, the lanes were reinforced with debris from the ruins of Curtea Nouă and Zlătari area.

The word “cişmigiu” is of Turkish origin and translates as a person responsible for building and maintaining public fountains. The name replaced older references to Dura, and was coined by the public since, at that time, the administrator of Bucharest fountains was living on the park grounds.

Cişmigiu continued to be developed by Meyer long after its official inauguration. In 1870, he laid out a plan to redesign the lanes, introduce an artesian aquifer, and create a kiosk for an orchestra. He also proposed to have gondolas carrying visitors over the lake.
Image Courtesy of Flickr and Gabriel.
Sight description based on Wikipedia.