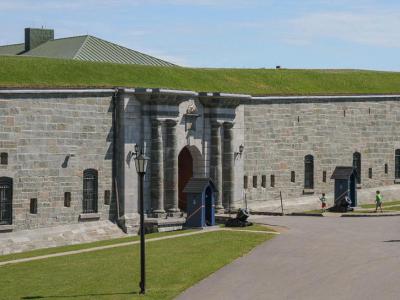 Often called “the Gibraltar of the Americas” on account of its strategic location, the star-shaped Citadelle of Quebec, built between 1820-50, is the largest British fortress in North America and forms part of the the city's ramparts. Though it never saw any action, the Citadelle continues to be the official residence of the Royal 22e Régiment, the only Francophone infantry regiment in the Canadian Forces Regular Force. An on-site museum, completed in 2014, commemorates the regiment's centennial anniversary, starting with the early days and Québec's most important battles and continuing up to the modern day involvement in Bosnia and other UN missions. One exhibit is dedicated to the war heroes of the 22e Régiment who fought in World Wars I and II, summarizing their duties, showing personal artifacts, and in one case showing a spy's various identity cards.

Why You Should Visit:
To take beautiful panoramic photos of Quebec with a clear view of Château Frontenac and Saint-Laurent river.
The grounds tour is quite informative and the museum has a diversity of memorabilia from various battles and wars.
The World War II exhibit is impressive given it has something most have never seen – since all similar items were destroyed.

Tip:
Be advised that the location is an active military installation and you can't just wander away during the tour or stay behind for extra picture taking after the tour is over.
If possible, go for the Changing of the Guard – you'll see a beautiful procession including the fort's mascot, a goat. The ceremony is held from June 24th to Labour Day, daily at 10am.