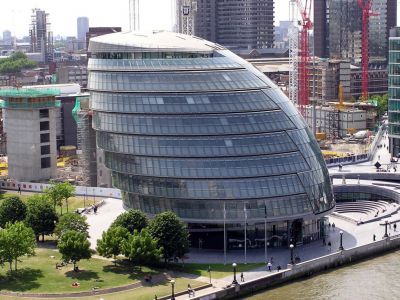 Some buildings in London will surprise you by their startling modernity. Sometimes it seems that architects go out of their way to make sure that visitors to the city realize that although it is steeped in ancient history, the capital and its people live in the 21st century. The City Hall is just one of these buildings, and once you have got used to its odd shape, you will appreciate the beauty of this futuristic structure.

The building is a 10 storey glass-and-steel office block that leans to one side. It was designed by Norman Foster in 2002 and won the competition to find the best design and location for the new home of the London Assembly. It is 45 metres high and takes up less space than a traditional cubed building of the same volume. It is filled with energy-saving features and uses less than a quarter of the energy of the surrounding buildings.

For the first time, the public was invited to help with the choice during the competition, and the 9th floor is open to visitors. There is a balcony that goes almost all the way around the building on this level and it’s probably one of the best places to take great photos of Tower Bridge and the Tower of London on the opposite bank of the Thames.

On the lower ground floor you will find a cafeteria, but if you have brought a picnic lunch with you, you can eat it on the west side of the building, where there is a sunken area, a bit like an arena with stone steps/benches. It is called the Scoop and lots of office workers eat their lunch there in fine weather.
Image by Arpingstone on Wikimedia under Creative Commons License.
Sight description based on wikipedia