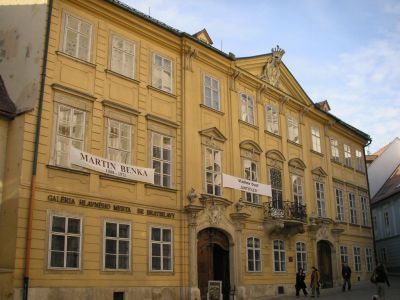 Founded in 1961, the City of Bratislava Gallery is the second largest gallery in the region. The structure can be found in the portion of the city known as Old Town, which is one of the most historic boroughs in the metropolis. Paintings and sculpture can be viewed in the Mirbach Palace and the Pálffy Palace. The origins of the facility go all the way back to the 18th century when Hungarian royalty and nobility had extensive collections of art, much of which has found its way into the assemblages owned by the country’s government. The Mirbach Palace was built in the 1700s by brewer Michal Spech. Predominantly in the Rococo architectural style, the building contains paintings and sculptures from the Central European Baroque period of time. The Pálffy Palace dates back to the 1800s and offers Classical style architectural elements. The institution is home to five permanent art exhibits including Central European Painting and Sculpture, Stories and Phenomena: 20th Century Slovak, Gothic Painting and Sculpture, Celtic Mint in Bratislava and Tapestries from England. Combined, the City of Bratislava Gallery contains over 35,000 pieces of artwork. In addition to collecting pieces of Slovak art, the gallery has a vast department which is devoted to restoration and conservation.