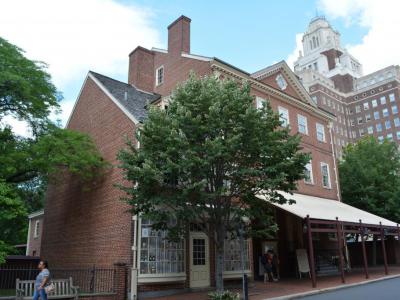 The City Tavern offers great food, fantastic service in period dress, and an outstanding atmosphere. Though not the original built-in 1773, but a historically accurate replication from 1976, you would be hard-pressed to know.

The original suffered fire damage in 1834 and was razed in 1854. Congress petitioned the Independence National Historical Park to preserve and protect this property, literally one where the Founding Fathers dined, drank ale, and argued political philosophy. Curiously, it was Ben Franklin who introduced tofu to the Americas, and the tofu pasta inspired by his recipe can be enjoyed in his private dining room.

Guests can stay inside for the colonial ambiance or choose to dine outdoors in the back garden area. The restaurant also features an acclaimed kids' menu, so a visit here with young ones isn't just about the historical and educational experience.
Image Courtesy of Wikimedia and Smallbones.