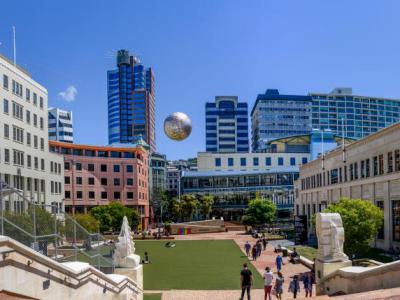 Civic Square, more formally known as Te Ngakau Civic Square, is a public square between the central business district and the Te Aro entertainment district. The square was completed in 1992.

Originally, Civic Square was named Wellington Civic Square. It was renamed to Te Ngakau Civic Square in 2018 as part of the City Council's Maori policy. Te Ngakau means "the heart." The new name was gifted to the city by the indigenous Maori people.

The square is surrounded by a number of administrative buildings like the Wellington Town Hall, the Michael Fowler Centre, the Central Library and the City Gallery. The Whairepo Lagoon is accessible from the Civic Square via the City-to-Sea bridge.

The square has a grassy lawn, a terracotta brick walkway and a tiled area that is actually the roof of the underground library car park. The square is a popular spot for outdoor lunches, relaxation, exercise and public events.
Image Courtesy of Bengt Nyman.