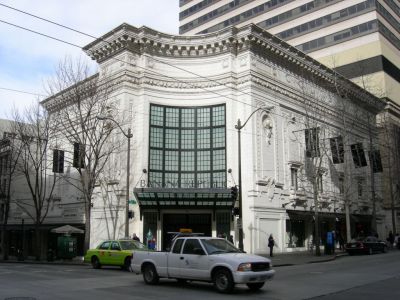 A former cinema in Seattle, the Coliseum Theater opened January 8, 1916 and was listed on the National Register of Historic Places in 60 years later. It was Seattle's first theater built specifically for showing movies, and was one of the first cinemas anywhere to strive for architectural grandeur. When it opened, it was advertised as "the world's largest and finest photoplay palace." In 1931, the Journal of the Royal Institute of Architects called it "the first of the world's movie palaces."

The exterior features elaborate terra-cotta work, and the original interior was comparably ornate. When it opened in the silent film era, it boasted a 7-piece orchestra plus an organist; the giant organ was made by Danish immigant M. P. Moller, and the musicians—all Russians—were reputed to be the highest-paid movie theater musicians in the country. Anita King attended the opening night to give a speech dedicating the theater.

The Coliseum continued as a first-run theater into the late 1970s, and continued to show films until 1990. Eventually, in 1995, the building—an official Seattle city landmark—was rehabilitated as a Banana Republic clothing store.
Image Courtesy of Wikimedia and Joe Mabel.