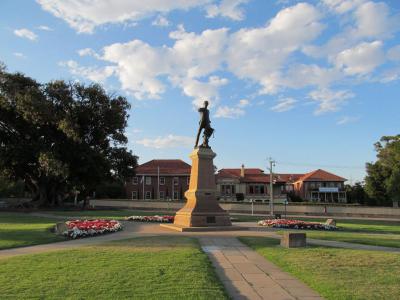 Distinguished soldier, sailor, linguist, musician and painter, Colonel William Light (1786–1839) was the first surveyor-general of Adelaide. He is largely responsible for designing the city's grid-like layout with parklands, known as "Light's Vision", which was truly ahead of its time.

This work was eventually acknowledged by the "Light's Vision commemoration" bronze statue, created by Scottish sculptor William Birnie Rhind. The monument depicts Colonel Light in the uniform of the British Royal Engineers, which was rather difficult to confirm in the 1830s, and so the statue took much longer to be cast than expected. It stands on a pedestal of textured and polished grey- and Murray Bridge red granite.

The inscription on the front of the pedestal reflects Light’s role in locating and planning Adelaide. On the back of the pedestal is a wreath added by the first Australian town planning conference held in Adelaide in 1917. Below the wreath is an extract from “A brief journal of the proceedings of William Light”, where Light thanks his enemies for giving him the sole responsibility of choosing the site of the city.

Initially installed in 1906, in Victoria Square, the statue soon proved to be a hazard to traffic there. In 1938, in time for the centenary of Light’s death, it was moved to Montefiore Hill, where it became the centrepiece of the balustraded garden lookout.

Until 2013, Light stood with his extended right arm pointing to the city below (his left hand holding a map). Legend has it that the Colonel indeed stood on Montefiore Hill in 1837, pointing at what would later become Adelaide's city center, and said: "This is the place for a city". Sadly, but the redeveloped Adelaide Oval now obscures the view and has lessened the impact of a visit to Light’s Vision.
Image Courtesy of Wikimedia and Orderinchaos.
Sight description based on Wikipedia.