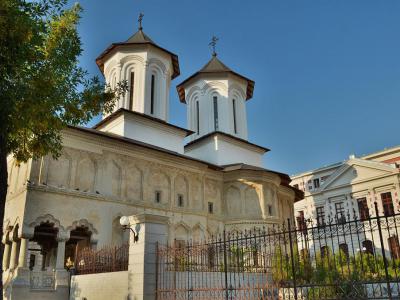 Erected between 1698 and 1702, Coltea Church is located close to University Square, next to Coltea Hospital, built in 1888, and it is one of Bucharest's 19th century architectural landmarks.

The Coltea Church was seriously damaged during the great earthquake of 1838, and was restored by architect Faiser. After the bombing of 1944 it underwent restoration in 1949. Since 1996, the church has been in the process of consolidation and repair; the work being slow due to the lack of funds.

The Coltea Church architecture features a three-cusped plan with the belfry placed on the narthex complete with the porch leaning on pillars and thick walls. It was built by Chancellor Cantacuzino in an Italian Baroque style with rich details of Brancoveanu style. The fabulous fresco inside the church is the work of Romanian painter Tattarescu. To erect this place of worship craftsmen were brought from both the West and the East. The dome of the nave is supported by two large arches: one going down to the floor, and the other one - to the narthex that leans on stone carved brackets. The nave is separated from the narthex by three arches, in the very centre, leaning on twisted fluted columns, with neo-Corinthian capitals and carved bases.

The harmony between architectural elements and those of fresco and oil paintings, as well as the richness of stone and wood carvings, makes this monument one of the most impressive in the Romanian capital.
Image Courtesy of Wikimedia and Andreiscurei.