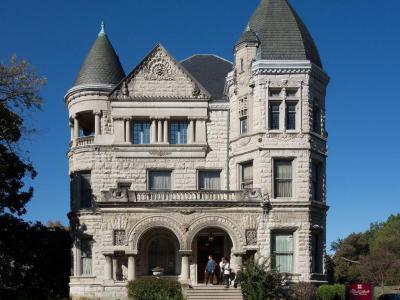 The Conrad-Caldwell House, or Conrad's Castle, is a historic, Victorian mansion set in the heart of Old Louisville, on St. James Court. Today it serves as a museum. Commissioned by Theophilus Conrad, a rich local businessman, the house was built by famed Louisville architect, Arthur Loomis, in 1895. Boasting a striking Richardsonian Romanesque exterior, the castle-like structure is one of the finest examples of this architectural style and symbolizes the progressive spirit and Victorian grandeur of Louisville’s Gilded Age.

Surrounded by a beautiful courtyard neighborhood, Conrad's Castle featured all the latest innovations of its day, including interior plumbing and electric lighting. Known for its beautiful woodwork and parquet floors, this massive Bedford limestone home, covered with gargoyles, beautiful archways, and elaborate stone designs, incorporated seven types of hardwoods and magnificent stained glass windows in the interior design, making it one of the most stunning dwellings in Old Louisville.

After the owner's death, the mansion was bought by the Caldwell family who lived here for 35 years. After the Caldwells, the house was used as a shelter for the Rose Anna Hughes Presbyterian Retirement Home. Currently a museum, its Victorian interiors are lovingly restored and preserved, featuring a wealth of period items, including many original pieces belonging to both families.

Why you should visit:
A site of cultural and architectural significance in Louisville, a standing testament to the abundant lifestyle of the owners, Theophile Conrad and William E. Caldwell, two of Louisville's most prominent businessmen and entrepreneurs.
A distinguishing marker in America’s largest concentration of Victorian homes.
A step back in time enabling to learn more about the era and the neighborhood.

Tip:
Guided tours of the museum are run on a “first come – first served” basis; no reservations accepted for groups less than 10. Advanced reservations are necessary for groups of 10 or more. Tickets can be purchased in advance at the door, 30 minutes prior to each tour. Children aged under 5 enter free of charge. On the third Thursday of every month, the museum offers extended times, at 5pm & 7pm, for its third Thursday Twilight Tours. The tours last from 60-90 minutes. Donations are greatly appreciated.