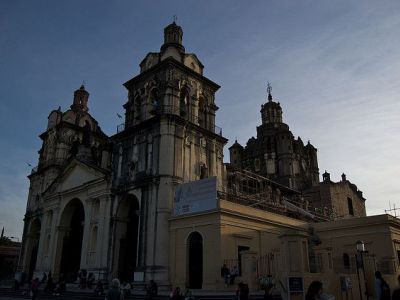 The ornate interior, overlooked by the sterling silver altar crafted in Colonial Peru, also includes a church tabernacle donated to the cathedral in 1804, as well as an extensive collection of silver and gold votive offerings. The interior was later decorated with frescoes and murals painted in the early years of the 20th century by Emilio Caraffa, Carlos Camilloni, and Manuel Cardeñosa; a cast iron monument, Cristo Redentor was installed above the portico in 1901.
Image Courtesy of Flickr and blmurch.
Sight description based on Wikipedia.

Want to visit this sight? Check out these Self-Guided Walking Tours in Cordoba. Alternatively, you can download the mobile app "GPSmyCity: Walks in 1K+ Cities" from iTunes App Store or Google Play. The app turns your mobile device to a personal tour guide and it works offline, so no data plan is needed when traveling abroad.