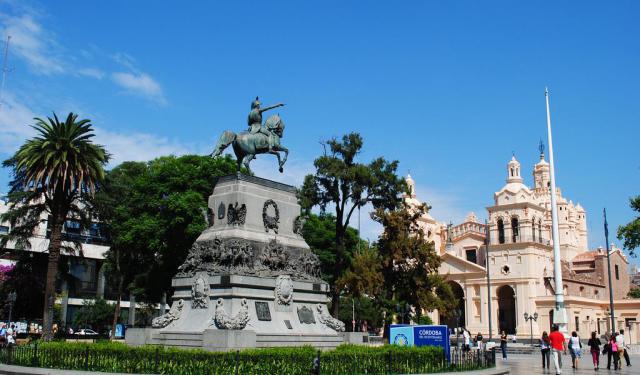 Capital of the eponymous Argentinean province, Córdoba is famous for its colonial-era architecture. The key landmark here is undoubtedly Plaza San Martín flanked by neo-baroque Córdoba Cathedral. To appreciate these and other beauties of Córdoba, follow this orientation walk and enjoy!
Image Courtesy of Wikimedia and Rafael Bravo.
How it works: Download the app "GPSmyCity: Walks in 1K+ Cities" from iTunes App Store or Google Play to your mobile phone or tablet. The app turns your mobile device into a personal tour guide and its built-in GPS navigation functions guide you from one tour stop to next. The app works offline, so no data plan is needed when traveling abroad.

Plaza San Martin is the most popular square in Cordoba and is located in the heart of the city. This lively place organizes fairs and exhibitions. In the middle of the park there is a statue of the General San Martin. Next to the plaza there is a colonial-style cathedral and a 17th-century cabildo. The plaza dates back to the 1577.
Image Courtesy of Flickr and morrissey.
2

The Córdoba Cabildo was the colonial town hall of Córdoba. Encinas' cabildo, which included only the Alcalde's office, living quarters and a small jail, was ordered replaced by a larger building in 1749 by the Alcade (Mayor), José Moyano Oscariz. The Governor of Córdoba appointed in 1783, the Marquess of Sobremonte, Rafael Núñez, prioritized the much delayed completion of the new Cabildo. He commissioned Juan Manuel López for the new project, which would feature a significantly larger office space, grand steps, a chapel, a patio, an archway of fifteen columns along the façade, and a covered arcade along the archway for the inclusion of storefronts. The greatly accelerated works were concluded in 1786, and would include the opening of the Santa Catalina Promenade between the cabildo and the recently built Córdoba Cathedral.

Marble cladding and a bell tower were added in 1885, though the latter was removed during the cabildo's restoration in the late 1930s, when numerous historic structures in Argentina were restored to their approximate, original design by having such additions demolished. The city government was relocated to a Renaissance Revivalist structure late in the 19th century, and to a Modernist building in the 1960s. A section of the historic cabildo remained in use by the Provincial Police Department of Information (DDI), however, and during the last dictatorship, this wing was used as one of over 300 detention centers operated by the regime during the Dirty War of the late 1970s.

Image Courtesy of Flickr and WolfOxs.
Sight description based on Wikipedia.
3

Image Courtesy of Flickr and blmurch.
Sight description based on Wikipedia.
4

Situated only half a block from Plaza San Martin and in the historic center of Cordoba, the Church of the Teresas features colors, beautiful architecture and a historic heritage that dates back to the early days of the city. The church was founded in 1625. Its design was created by Andrés Blanqui. The convent has seven courtyards, an old chapel and the cemetery.
Image Courtesy of Flickr and Rafael Bravo.
5

Iglesia y Convento San Francisco was built in Neoclassical style. It was founded in 1813 and designed by Juan Manuel Lopez. The church's facade shows its Italian style. The interior is made in Baroque style and ornamented with paintings from the 17th, 18th and 19th centuries. The furniture inside the church dates back to the 16th century. The church belongs to the order of the Franciscans which is why the church is so richly decorated.
Image Courtesy of Wikimedia and Ezarate.
6

Museo-Casa del Virrey Sobremonte is located in the district of Lujan on Rosario de Santa-Fe street. It claims to be the most beautiful colonial house in Cordoba. In 1752 this house was the home of Marquis de Sobremonte. It was declared a National Historic Landmark and has great historic importance. The museum includes a chapel and a courtyard, and preserves furniture and objects of great value.
Image Courtesy of Flickr and Marcelo Favre.
7

Museo Municipal de Bellas Artes Dr Genaro Pérez was established in 1943. The design of the building in which the museum is housed was crated by Lanusse and Harry in 1905 in the French style. The museum's permanent collection consists of paintings from the 19th and 20th centuries. There are exhibited works by the greatest Argentinian artists such as Emilio Caraffa, Lucio Fontana and Antonio Berni. The museum is open daily, Tuesday to Sunday from 10:00 a.m. to 8:00 p.m.
Image Courtesy of Flickr and obvio171.
8

Iglesia de Santo Domingo was established in 1861 and is located in the heart of the city. It underwent several changes throughout the years. The design of the church is simplified, its façade having features of the Renaissance style. The domes of the temple look with a majestic air over the city.
Image Courtesy of Flickr and Latente!.
9

The Libertador San Martín Theatre is the premier stage theatre, opera house and concert hall in Córdoba. The landmark institution was inaugurated on April 26, 1891, as the Rivera Indarte Theatre. Popularly known as the Teatro de la Calle Ancha ("Broad Street Theatre") during the early 20th century, the grand concert hall was designed for a capacity of 1,000 spectators. Its concert hall featured a rising floor to stage level, made available during the many social balls held there since then. Among the first prominent drama theatre directors to stage productions there was María Guerrero, who popularized the theatre of Spain in Argentina after 1897. Subsequent years saw numerous internationally renowned classical performers, as well, notably Enrico Caruso, Titta Ruffo, Tito Schipa and Arthur Rubinstein.

The theatre additionally houses the Luis de Tejeda and Rafael Grisolía halls, each with capacities of around 100 and mainly reserved for seminars, as well as for the theatre's Youth Orchestra. A museum of the institution's extensive stagecraft collection was organized into the Cristóbal de Aguilar Musical and Theatre Museum in 1970.

The institution was renamed in honor of General José de San Martín in 1950 by order of President Juan Perón on the occasion of the centennial of the Liberator's death.
Image Courtesy of Wikimedia and Cordobes.
Sight description based on Wikipedia.
11

Museo de Antropologia is an institution of scientific education. Its aim is to collect, preserve and exhibit the culture of humanity and society, ancient and contemporary. The museum is located at the National University of Cordoba, Faculty of Philosophy and Sciences. The museum encourages respect of other cultures and lifestyles in order to enhance and develop cultural heritage.
Image Courtesy of Wikimedia and Éclusette.
12

The museum maintains 12 exhibit halls, a sculpture garden, library, and an auditorium for 120. Its collection of over 500 works includes those by Emilio Caraffa, Juan Carlos Castagnino, Gustave Courbet, Pablo Picasso, Joaquín Sorolla, Lino Enea Spilimbergo and Ricardo Supisiche, among others. The museum hosts ongoing temporary exhibits, as well.
Image Courtesy of Wikimedia and Leandro A. Martínez.
Sight description based on Wikipedia.
13

Aside from those of its namesake, the museum maintains paintings and sculptures by other renowned local artists such as Juan Carlos Castagnino, Pablo Curatella Manes, Fernando Fader, Emilio Pettoruti, Lino Enea Spilimbergo, as well as lithographs by Pablo Picasso and paintings by Tsuguharu Foujita and Francisco Goya. The museum also hosts temporary exhibits and includes the provincial art archive and restoration workshop, as well as a library and educational facilities.
Image Courtesy of Wikimedia and tercerojista.
Sight description based on Wikipedia.