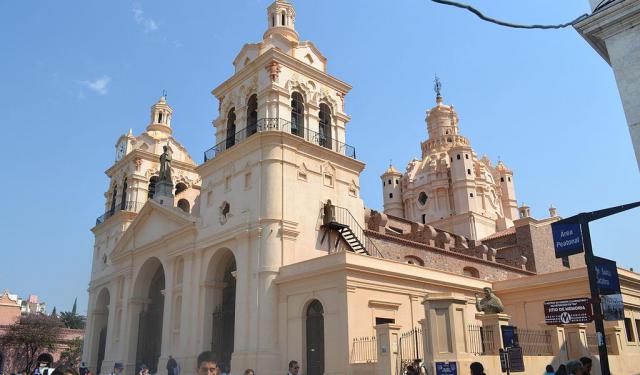 The city of Cordoba has many places of worship of different faiths and denominations, including Catholic churches, synagogues and mosques. The central masterpiece of the city is the Cordoba Cathedral, standing majestically in the very heart of the city. Take this tour to get acquainted with the religious life in Cordoba.
Image Courtesy of Nadiapicco.
How it works: Download the app "GPSmyCity: Walks in 1K+ Cities" from iTunes App Store or Google Play to your mobile phone or tablet. The app turns your mobile device into a personal tour guide and its built-in GPS navigation functions guide you from one tour stop to next. The app works offline, so no data plan is needed when traveling abroad.

Iglesia de Santo Domingo was established in 1861 and is located in the heart of the city. It underwent several changes throughout the years. The design of the church is simplified, its façade having features of the Renaissance style. The domes of the temple look with a majestic air over the city.
Image Courtesy of Flickr and Latente!.
2

Monasterio Santa Catalina de Siena is a monastery and a church in the center of the city. The monastery was established in 1641. Its facade was created in Neoclassical style with features of the Baroque style. At the entrance to the monastery there is a statue of St. Catherine of Siena who is the patron saint of the church.
Image Courtesy of Flickr and Tony the Misfit.
3

Image Courtesy of Flickr and blmurch.
Sight description based on Wikipedia.
4

Situated only half a block from Plaza San Martin and in the historic center of Cordoba, the Church of the Teresas features colors, beautiful architecture and a historic heritage that dates back to the early days of the city. The church was founded in 1625. Its design was created by Andrés Blanqui. The convent has seven courtyards, an old chapel and the cemetery.
Image Courtesy of Flickr and Rafael Bravo.
5

Iglesia y Convento San Francisco was built in Neoclassical style. It was founded in 1813 and designed by Juan Manuel Lopez. The church's facade shows its Italian style. The interior is made in Baroque style and ornamented with paintings from the 17th, 18th and 19th centuries. The furniture inside the church dates back to the 16th century. The church belongs to the order of the Franciscans which is why the church is so richly decorated.
Image Courtesy of Wikimedia and Ezarate.
6

Iglesia de San Roque was completed in 1765 and consecrated to San Roque. It has a beautiful facade and features a tower. The temple was built with the help of Bishop Salguero. The interior of the church is adorned with some important works of religious art including a statue of Christ and a carved pulpit.
Image Courtesy of Flickr and cliff1066™.
7

Iglesia Nuestra Señora del Pilar is a veritable work of art. It dates back to 1738. It is one of the oldest churches in Cordoba and was restored in the last century. The facade was built in classical and colonial styles. The church has its ancient entrance door carved with various interesting elements and features Ionic colonnades.
Image Courtesy of Flickr and prayitno.
8

Basílica de la Merced was founded in 1826. The design of the church was completed by Kánepa Bettoli in an Italian style. The basilica has some features from those of Rome and some influences of eclecticism. It was named a basilica in 1926. The basilica is a true masterpiece with the architecture consisting of several styles.
Image Courtesy of Flickr and Miki Melinda.