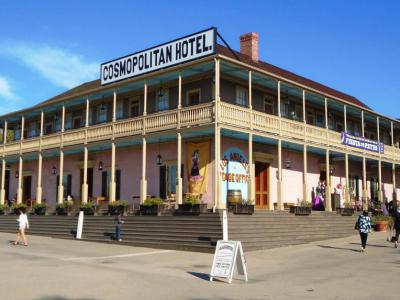 Peruvian immigrant Juan Bandini reached San Diego in 1819 and became one of its wealthiest early settlers, his former home having been purchased by one Albert Seeley to serve as a stagecoach hotel for travelers on the daylong trip south from Los Angeles. In 2010, faithful restorations and an added fine dining restaurant (featuring Mexican and American cuisine) revived the hotel to its 1870s glory, making it again a focal point of the original Downtown area.

With antique furnishings, chain-pull toilets, claw-foot tubs and a veranda overlooking Old Town State Historic Park, the charming Cosmopolitan gives guests a taste of Victorian-era living (no flat-screens or marble bathrooms here!). Its bar preserves the neighborhood's old-world aesthetic, complete with servers in period garb and game trophies mounted on the walls. The quality of the cocktails and the friendly atmosphere make this a gem among the rest of the old west kitsch.

The hotel is reportedly haunted with multiple friendly spirits in its guestrooms, including the ghost of Ysidora Bandini (daughter of original proprietor) and her cat in Room 11, and the spirit of a 'Lady in Red' in Room 4/5, to name a few.
Image by Beyond My Ken on Wikimedia under Creative Commons License.