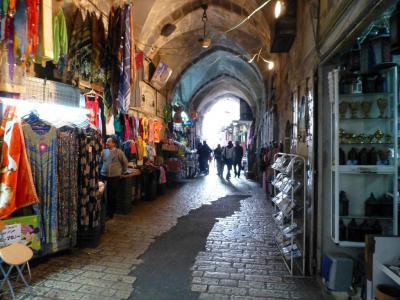 Built during the Mamluk period (1336-37), this covered souk, looking quite similar to Damascus markets, was originally designed as a commercial center for one of Egypt's most celebrated Sultans, An-Nasir Muhammad, and served to improve the landscape of Jerusalem with its monumental gate that leads onto the al-Aqsa Mosque. Once again fully operational, it is mostly used by Muslim worshippers who pass through on their way to or from the Temple Mount. While entering through the gate it is usually out of range for non-Muslims, they are allowed to depart from the Temple Mount by this route.

In addition to numerous small shops, still in existence to today, the souk used to have living quarters running over its whole length, as well as two luxurious bathhouses which, until the early 1970s, were used by Old City inhabitants. Between the two bathhouses stands the beautiful Khan Tankaz – a former hostel (or "caravanserai") for merchants and pilgrims – the first of its kind in the city – that has been recently restored with funds from the European Union; although not officially open to the public, a quick look around the place is almost certainly possible if you ask.

Tip:
Less than 50 meters (160 ft) south of the souk, on El-Wad Road, notice the small 16th-century public drinking fountain, one of the six erected during the reign of Suleiman the Magnificent.
Image Courtesy of Flickr and Paul Arps.