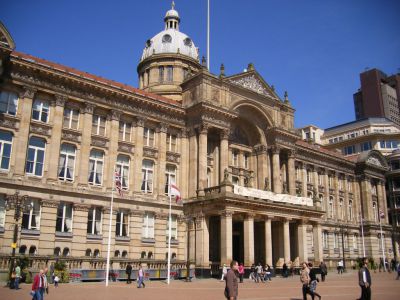 Birmingham City Council House is the seat of local government for Birmingham, UK, and is a listed historic building.

The land on which it stands today, together with the adjacent Museum and Art Gallery, was previously occupied by several properties, including the clothes shop called "Cabinet of Curiosities". Curiously, the last tenants of that building were the Suffield family, ancestors of J. R. R. Tolkien, author of the acclaimed high fantasy works The Hobbit and The Lord of the Rings.

The plot was earmarked for development and purchased in 1853, however, constant financial difficulties put the development on hold until 1871 when the council finally agreed to give it a go. Construction commenced in 1874 when the first stone was laid by the then mayor Joseph Chamberlain (father of the future British Prime Minister, Neville Chamberlain, 1937-1940).

Design for the project was by Yeoville Thomason. The side of the building, which faces Chamberlain Square, is the entrance and façade of the Museum and Art Gallery which is partly housed within the same building. During construction, amendments to the Art Gallery entrance and clock tower, known locally as "Big Brum", had to be made. Above the main entrance, which faces Victoria Square, is a mosaic of Venice by Salviati Burke & Co.

On 9 August 1902, The Council House, along with the Town Hall, was illuminated in celebration of the coronation of King Edward VII.
Image by Elliott Brown on Wikimedia under Creative Commons License.
Sight description based on wikipedia