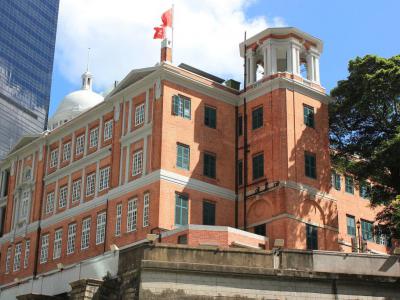 The Court of Final Appeal of Hong Kong is the court which has the final adjudication power on all the laws of the city of Hong Kong. It is located in the Former French Mission Building, in the Central district of Hong Kong Island.

On the first of July in the year 1997, Hong Kong’s sovereignty was transferred from the United Kingdom to China. Before this time, Hong Kong was under British rule and the powers of final adjudication on its laws were with the Judicial Committee of the Privy Council in London. After gaining sovereignty from the United Kingdom, the Court of Final Appeal was established in Hong Kong.

The court is housed in the Former French Mission Building, which was originally a mansion called Johnston House. During the 1870s and 1880s the building was altered into a 3 storey building. The present building was constructed in 1917, and its design is based on “Beaconsfield”, a structure near the site of the French Mission Building. The building has a red brick facade, and is built in an Edwardian period, neo-classical style with granite blocks. The structure was constructed on a podium due to the hilly areas of the Government hill in Hong Kong.
Image by Craddocktm on Wikimedia under Creative Commons License.