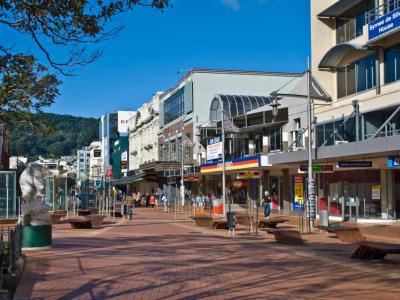 Courtenay Place is the main street of the Courtenay Quarter in the Wellington's inner-city district of Te Aro. It is known for its entertainment and nightlife. Many restaurants are open late and most of the bars stay open until dawn. It contains offices, accommodation, tourist shopping, entertainment, food, art and buskers offering many genres of free performance.

Lambton Quay, Willis Street and Courtenay Place form what is known locally as the Golden Mile. Every two years Courtenay Place is home to many of the New Zealand International Arts Festival events.

Embassy Theatre is on the Wellington City Council's heritage list in the District Plan. Heritage New Zealand has recognised its heritage values with Category One registration, indicating a place of 'special or outstanding historical or cultural heritage significance or value'. It was originally known as the 'De Luxe' and was built in 1924. Designed by Llewellyn Williams and constructed of reinforced concrete, it included classical external and internal architectural details. The name changed to the Embassy in 1945. The Lord of the Rings movie The Return of the King had its world premiere at the Embassy Theatre at the head of Courtenay Place. The movies The Two Towers and The Fellowship of the Ring both had their Australasian premiere at the Embassy.