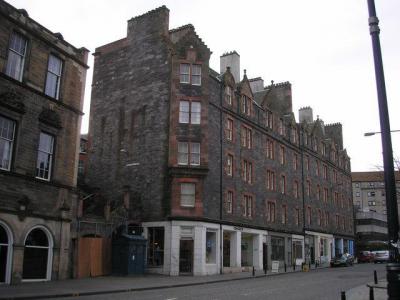 Cowgate Street is in Edinburgh’s Old Town. It runs from Holyrood Road, under George IV Bridge, to the Grassmarket.

The street is so named as once cows were driven along here to the market. “Gate” is another term for street. As it lies in the same small valley as the Grassmarket, Cowgate is lower than the surrounding street levels.

From the 18th century until the end of the 1950s, Cowgate was part of the city’s slum area and was known as “Little Ireland” due to the number of Irish immigrants who settled there. James Connolly was born at number 107. He is known for his leadership in the Irish Easter Rising in 1916. During the Rising he was wounded and was executed tied to a chair.

The oldest building in the street is Magdalen Chapel, built in the 16th century. Another fine old building is St Cecilia’s Hall, built in 1761 for the Musical Society. It has a small concert area and houses a small museum of musical instruments.

During the Edinburgh Festival you can get tickets to see one of the shows or concerts that are put on by the Underbelly Theatre, and there is a wonderful pub along the street called the Three Sisters, where you can enjoy a good meal and sample some of Scotland’s finest beers and whiskies.
Image Courtesy of Wikimedia and Sandy Gemmill.