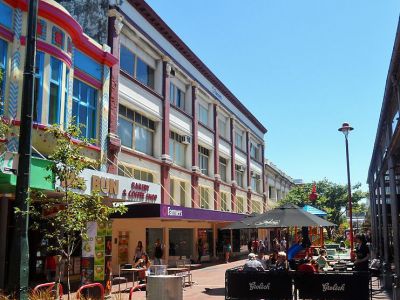 Cuba Street is a major city street and one of the best known streets in Wellington. It is often thought of as the cultural center of the city. The street and its surrounding area offer numerous music venues, bookshops, record shops, restaurants and cafes.

Cuba street runs from Te Ngakau Civic Square to Webb Street. It is fully pedestrian between Ghuznee and Manners Streets. Cuba Street was originally a street full of basic homes that evolved over time. The historic buildings, built in the 19th and 20th centuries, are in Edwardian and Art Deco styles.

The street was developed when the land was colonized. It was named for the settler ship, the Cuba, which arrived at the harbor in 1840. It was named by Captain William Mein Smith, the first Surveyor General.

In the 1970s and 1980s, a portion of Cuba Street was in the city's red-light district. Peep shows, strip clubs and gay bars populated the street. There were also numerous street prostitutes in the area. New Zealand's most famous drag queen and activist, Carmen Rupe, ran a coffee lounge in the red light district. Her likeness is now on pedestrian light signals in the four intersections along Cuba Street.

Cuba Street was registered as a historic area in 1995. It has over 40 buildings that are deemed to be historically significant. Two of these buildings include the Bank of New Zealand Building and the National Bank Building.

Today, you will find shopping, dining and plenty of art on Cuba Street. You will also find public art, like the Bucket Fountain, which is located on Cuba Street's Commonwealth Walkway.
Image Courtesy of Wikimedia and Pear285.