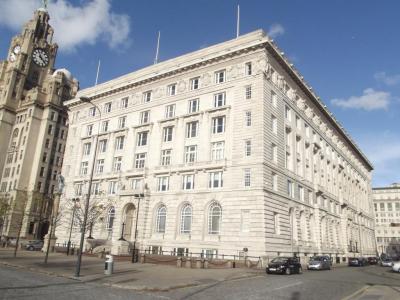 The Cunard Building is located at the Pier Head and, along with the neighbouring Liver Building and Port of Liverpool Building, is one of Liverpool's Three Graces, which line the city's waterfront. It is also part of Liverpool's UNESCO designated World Heritage Maritime Mercantile City.

It was designed by William Edward Willink and Philip Coldwell Thicknesse and was constructed between 1914 and 1917. The building's style is a mix of Italian Renaissance and Greek Revival, and its development has been particularly influenced by Italian palace design. The building is noted for the ornate sculptures that adorn its sides.

The building was, from its construction until the 1960s, the headquarters of the Cunard Line, and still retains the name of its original tenants. It was also home to Cunard's passenger facilities for trans-Atlantic journeys that departed from Liverpool. Today, the building is owned by Liverpool City Council and is home to numerous public and private sector organisations, including The British Music Experience.

Why You Should Visit:
While there is no general public access to the building, it can be fully appreciated from all sides via the surrounding public thoroughfares.

Tip:
Consider taking an extra layer of clothing when visiting this attraction, as Liverpool's waterfront can be chilly even on the sunniest days.
Image Courtesy of Flickr and Elliott Brown.
Sight description based on Wikipedia.