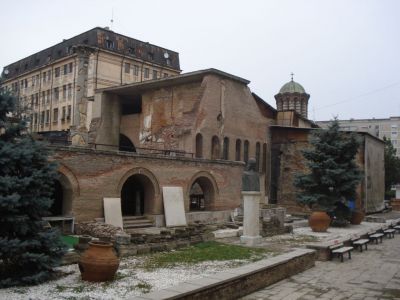 Curtea Veche (the Old Princely Court) is a former royal residence in the historic center of Bucharest, built during the rule of Vlad III Dracula in 1459; currently operating as a museum.

Vlad the Impaler's reign was dominated by conflicts with the Ottoman Empire; hence the need to protect the southern border made him stay in the fortified town on the Dâmbovița banks. On 20 September 1459, he issued a document, specifically referring to the "fortress" in Bucharest, as his "princely residence".

In the 16th century, Mircea Ciobanul thoroughly rebuilt the palace, subsequently defining the limits of the city, with his court being its economic nucleus, surrounded by houses of traders and craftsmen, later known as the Lipscani. The princely church built by Mircea Ciobanul in 1559 is the oldest religious building maintained in its original role in Bucharest.

Matei Basarab repaired the palace during his own reign, and, after him, Constantin Brâncoveanu further extended it, adding stone columns and a marble staircase at the entrance. Fires, earthquakes and raids in the following years forced another ruler, Alexander Ypsilanti, to build a new princely court at Dealul Spirii, in 1775, upon which the old court acquired its present name.

In 1798, Ypsilanti's successor Constantin Hangerli sold the property for housing construction, at which point the history of the fortress ends. In 1800, Hanul lui Manuc, among other buildings, was built on the territory.

Archaeological excavations carried out throughout 1967-1972 discovered on the site remains of the royal palace, upon which it was turned into an open-air monument, which is now operated by the Muzeul Municipiului București. In its current role as a museum, the palace and the neighborhood inspired Mateiu Caragiale to write his novel, Craii de Curtea-Veche (Kings of The Old Court).
Image Courtesy of Wikimedia and Pixi.
Sight description based on Wikipedia.