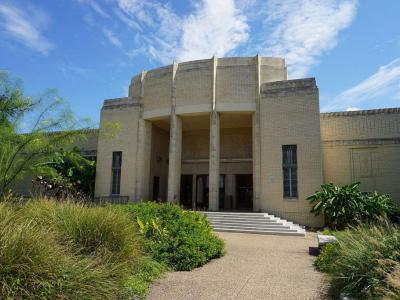 The Children’s Aquarium is one of the most interesting exhibit venues in Fair Park. It is associated with the Dallas Zoo Family. It opened to the public in 1936, and was one of the feature exhibits of the Texas Centennial Celebration.

As part of the overall Park, it is done in a deco art style of architecture. The building holds thousands of different types of animals and fish. The location showcases an exhibit called the “Greatest Hits of the Sea.” In this exhibit, kids can see sting rays, eels, sea urchins, anemones, and a host of other wonderful creatures. There is also an outdoor display that is called Stingray Bay, where people can actually interact with a variety of sea creatures.

The Aquarium is located between the Giant Ferris Wheel and the Fair Park Band Shell. The park was recently updated, to the tune of eight million dollars, so it is definitely a modern facility. The park is open to the public daily from 9:00 a.m. until 4:30 p.m. Adults can get in for $8. Children age three to eleven are $6. Kids under age three are free.
Image by Serge Talfer on Wikimedia under Creative Commons License.

This sight is featured in a self-guided walking tour of Dallas, Texas within the mobile app "GPSmyCity: Walks in 1K+ Cities" which can be downloaded from iTunes App Store or Google Play. Please download the app to your mobile phone or tablet for travel directions for visiting this sight. The app turns your mobile device to a personal tour guide and it works offline, so no data plan is needed when traveling abroad.

Attractions for Kids at Fair Park

Fair Park is the biggest park in the city and one of historic and cultural significance. Established in 1880, this landmark is located not far from downtown Dallas. Fair Park offers plenty of cultural and entertainment facilities, especially for children. Here you will find many places of interest, including museums, exhibitions, performance stages, landscaped grounds, a big aquarium, and the...  view more

The Arts District is a performing and visual arts center located in the heart of Dallas and is home to several of Dallas' cultural landmarks. Since the 1970's, the "village of the arts" has offered facilities for the visual, performing, and developing arts.

Deep Ellum is the famous, avant-garde entertainment district in Dallas. The district is a vibrant community known for...  view more

Places of Worship in Dallas

Dallas is one of the biggest cities in the world and one that is rich in religious congregations. Every place of worship in Dallas is worth visiting, yet the downtown concentrates are especially memorable. Cathedrals, churches, and chapels are all here for your enjoyment.

Like every city in the world, Dallas features many remarkable landmarks that are both historic and cultural symbols of the city's heritage. This tour will offer you the opportunity to discover the rich history of Dallas, including but not limited to: the Reunion Tower, Old Red House, Dealey Plaza, and Sixth Floor Museum.