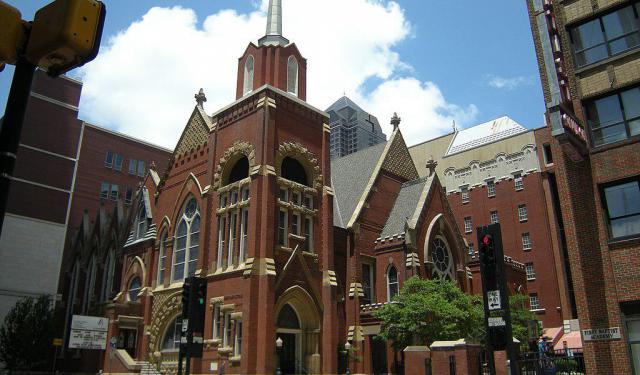 Dallas is one of the biggest cities in the world and one that is rich in religious congregations. Methodist, Baptist, and Presbyterian churches are prominent in many neighborhoods and anchor two of the city's major private universities (Southern Methodist University and Dallas Baptist University); however, the Catholic Church has a significant presence, with the Arts District's Cathedral Shrine of the Virgin of Guadalupe being home to the second-largest Catholic church membership in the U.S. and overseas. Every place of worship in Dallas is worth visiting, yet the downtown concentrates – be they cathedrals, churches, or chapels – are especially memorable. Take this walking tour for an easy top five!
Image Courtesy of Wikimedia and Joe Mabel.
How it works: Download the app "GPSmyCity: Walks in 1K+ Cities" from iTunes App Store or Google Play to your mobile phone or tablet. The app turns your mobile device into a personal tour guide and its built-in GPS navigation functions guide you from one tour stop to next. The app works offline, so no data plan is needed when traveling abroad.

St. Paul was designated as an historic landmark by City of Dallas in 1982. In 2013, the church was approved as Texas Historical Landmark. In 2016, St. Paul was named to the national registry of historic sites. There was a recent effort to renovate this old church, which now is finished. It was quite the undertaking, as walls had to be stabilized and restored. An elevator was also added to the church for the handicapped and elderly. The church can be visited most any day of the week, but they also have worship service on Sundays at 10:45 a.m.

2) The Cathedral Shrine of the Virgin of Guadalupe

This congregation is also a great promoter of the arts in the area. They hold events for the Arts District many times each year. They also sponsor the Greater Children’s Chorus of Dallas, which is a sacred choir. It is located in the same area is the Sculpture Garden, Dallas Symphony, and the Dallas Museum of Art.

In the current day setting, the church not only ministers to its thirteen thousand members, but also runs a small college, a school, and several radio stations throughout Texas. The local congregation is also known for its mission work in the downtown Dallas.
Image Courtesy of Wikimedia and Joe Mabel.
5

The exterior walls contain the original pictorial windows of "art glass." These were prepared by the Kansas City Stained Glass Works Company and shipped to Dallas in 1912. The interior design is a modified Akron Plan. The Akron plan was developed by Akron, Ohio architects (1900–1920) to promote efficiency of movement by congregants between worship and Sunday School. This plan is characterized by a semicircular amphitheater with curved seating, opening to classrooms immediately adjacent to the Sanctuary.
Image Courtesy of Drumguy8800.
Sight description based on Wikipedia.