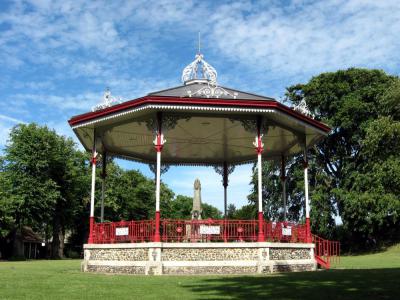 The Dane John mound dates from Roman times. It was a burial mound built between the first and fourth centuries. The site was later used as an 11th-century motte-and-bailey castle. This area has been a civic park since 1790.

In 1066, William the Conqueror wanted a castle built for the city. So the Dane John mound was incorporated, as was the circuit of defense.

A motte-and-bailey castle is a simple earthen and timber structure that unskilled laborers can quickly build. It is identified by a raised area of ground, or "motte," a walled courtyard, or "bailey," and a protective ditch and palisade. This structure was later abandoned in favor of the more modern Canterbury Castle, built just north of here in 1123.

The gardens were uniquely designed to feature the history of the site. The castle motte is still prominent, as are the Roman bank and medieval walkways. During World War II, parts of the Gardens were used as an ammunition depot.

The Gardens are the site of the local annual Christmas market and many other festivals throughout the year.
Image Courtesy of Wikimedia and Jean Marc Gfp.