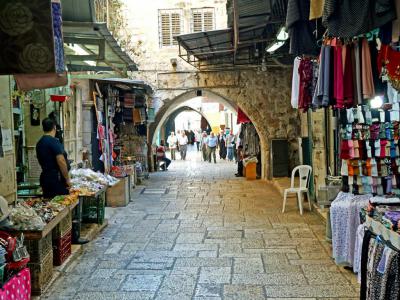 Running downhill from the Jaffa Gate to the Western Wall, David Street is a pedestrian pathway separating the Christian Quarter from the Armenian. The proximity of the Jaffa Gate and the beauty of the street itself regularly draw a large varied crowd, attesting to which is a constant hustle and bustle: Jews heading for service to the Western Wall, Christian pilgrims proceeding to the Church of the Holy Sepulcher, Muslims going up to pray on the Temple Mount, and thousands of tourists and visitors just hanging around.

Too narrow for motor vehicles and with just about enough space to push through an occasional three-wheeled cart, this part of the Old City is a home to the most famous tourist market in Jerusalem, the Arab Market (or “Arab Shuk”), comprising several different parts. The one in the Christian Quarter is mostly tourist-oriented with a major emphasis on Christian-themed gifts. There are a few nice bakeries and small supermarkets found in the area, too, that serve local residents.

NOTE: Haggling is appropriate only with regards to tourist items, household goods and so on. Produce stalls have fixed prices (sometimes written on signs, often only in Arabic, and sometimes not written). You DON'T haggle over prices at produce stalls; the shopkeepers will find it amusing at best and slightly offensive at worst if you try to do so.