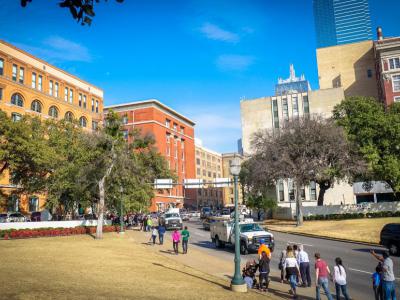 Dealey Plaza and the high bluff referred to as the "grassy knoll" figure prominently in the Kennedy assassination. It is this site on the north side of Elm Street where the famed Abraham Zapruder film of the assassination was taken and where eyewitnesses to the shooting dropped to the ground, believing they were in the line of fire. The area looks much as it did in 1963, and one will usually see a dozen or more visitors milling about, pointing to the actual (X-marked) site of the shooting, taking photos, or discussing theories about the tragic event, which continues to be a source of controversy today.

There is lots of good signage with extensive historical information throughout the plaza, as well as many commemorative plaques, but to really embrace the full experience, consider visiting the Sixth Floor Museum located on the actual sixth floor of the old Texas School Book Depository, where Lee Harvey Oswald fired his fatal shots. Most visitors are fascinated by the tour, which includes a photo maze of the Kennedy family and presidency, as well as continuous videos with never-before-seen footage of JFK's funeral, interviews from witnesses, and evidence used by the Warren Commission on display.

Why You Should Visit:
A visit to this plaza and its museum is truly like going back in time and promises to leave you wondering.