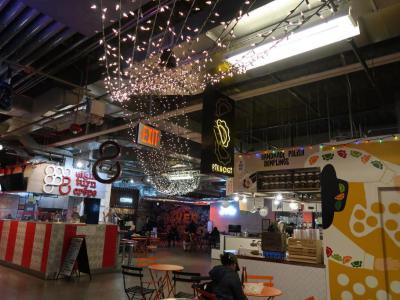 Brooklyn's own version of the Chelsea market (albeit somewhat smaller), DeKalb Market Hall is a new major addition to the culinary map of the United States fit to beat all the other food markets out there hands down. Located in the City Point development in downtown Brooklyn, DeKalb houses an array of local and regional food outposts serving so many different cuisines that you'd be struggling to know where to begin.

Want a jerk chicken? – done; steam buns? – you're covered; pierogi and kielbasa? – just like they make it back in Poland; and that’s just to start. With more than 40 trendy and delicious places under one roof, you simply can’t go wrong at DeKalb! There are Asian vendors selling ramen, noodles and everything in between, a bakery, a great bar selling craft beer on a tap and in cans, many dessert places, a BBQ, Hawaiin comfort food, a cheesebar, a creamery, hamburgers, you name it. They even have a Katz's Delicatessen here saving you the trouble visiting their iconic, crazy-busy original Lower East Side location if you want.

As an extra bonus, there's even a Trader Joe's to go shopping at afterwards – very convenient! And what's more, DeKalb also hosts daily entertainment and programming, with a custom show kitchen and a stage for live concerts which only adds to the great vibe. The place isn't too brightly lit, has a perfect size (quite big actually!) and has other sit down restaurants (and even a Whole Foods Market!) at the edges, plus communal seating areas, chairs, tables and benches all around. The food and the atmosphere are great, and there literally is something for everyone – meat lovers, vegetarians, vegans alike. Visit here, you won't regret!
Image Courtesy of Flickr and Bex Walton.