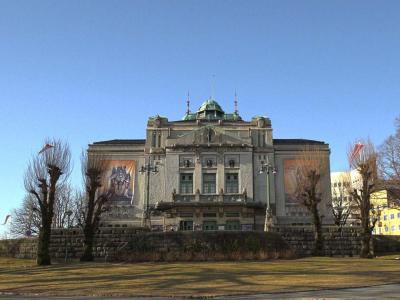 Den Nationale Scene (English: The National Scene) is the largest theatre in Bergen and one of the oldest permanent theatres in Norway. It was founded on the initiative of the Norwegian violinist, Ole Bull, in 1850 and was first known as Det Norske Theater.

With a mission to facilitate the development of Norwegian playwrights, the theatre once had none other than Henrik Ibsen himself as one of its first writers-in-residences and art-directors. Ibsen's first contemporary realist drama, The Pillars of Society (Samfundets støtter), saw its national premiere here on 30 November 1877.

Initially housed in the Komediehuset på Engen, the theatre moved, in 1909, to a new location at Engen. This (current) Art Nouveau building was designed by Norwegian architect Einar Oscar Schou. It opened on 19 February 1909 with a production of Erasmus Montanus by Ludvig Holberg, with King Haakon VII of Norway and Queen Maud being in attendance.

It soon became apparent, though, that this building was too small, and in 1920 it was extended northwest. The pre-war period of 1934-39 was quite fruitful for the theatre. Over the following years, the building had undergone numerous modifications and technical modernization. The foyer and the hall, destroyed during World War II, were restored initially only partially.

It was only in 2001 that the building almost fully regained its original shape. Today, the National Scene houses three stages and hosts approximately 20 productions per year, featuring both national and international classics, musicals and contemporary drama, as well as children's performances. Since 1993, the theatre has been a state property.
Image Courtesy of Wikimedia and trolvag.
Sight description based on Wikipedia.