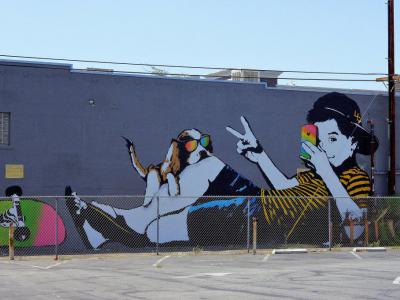 Created by the globally-famous Long Beach street artist Bumblebee, the Deuces mural deals with the theme of “puppy love” which has been a recurring one for this artist. The ginormous piece depicts a reclining kid who's chilling out in the company of his best friend – a hush puppy – resting on his knee, his favorite skateboard at his feet and a smartphone in hand.

Considerate and thoughtful, Bumblebee often addresses in his work the serious issues like child homelessness and impact of modernity upon nature, but in a rather whimsical, playful and colorful way. Using the stenciling technique and mixed media, he puts images of children on the some low-profile walls around the globe. Despite the seriousness of his illustrated topics, all of Bumblebee's creations exude a sense of childish innocence, freedom and love, and are ultimately just a burst of fun.
Image Courtesy of Flickr and joey zanotti.