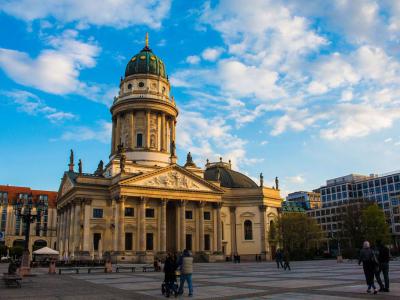 Deutscher Dom (German Cathedral) is a colloquial name for the Neue Kirche (New Church) on Gendarmenmarkt in Berlin, situated right across from Französischer Dom (French Cathedral). First built in 1701-1708 by Giovanni Simonetti, the cathedral was modified in 1780-1785 by Georg Christian Unger who added the eastern domed tower complete with the statues depicting characters from the Old and New Covenant, created by Christian Bernhard Rode. One of the statues, symbolizing the victorious virtue, is topping the dome.

The church was terribly damaged during WWII, in the bombing raid of 1943, and was subsequently rebuilt, from 1977 to 1988. Eventually, it was deconsecrated and reopened in 1996 as the Bundestag's museum of German parliamentary history. Very well organized and detailed, the exhibit, known as the Bundestag's Exhibition, spans five floors and covers the 1800s, World War I, Weimar Republic, Nazi era, Cold War era, and the current times. There is a replica of the Bundestag on one of the floors.

Another, perhaps even more interesting thing about it is a walk up the tower. Although you are not allowed all the way to the top, the stairs lead you to the landings where you can take some really cool shots of the cylindrical red brick tower topped by the dome. The stairwell is on the right of the cash register in the gift shop, with the stairs running around the outside of the tower, so the middle is open. This is an admission-free attraction.

If you are visiting Berlin and heading to Gendarmenmarkt, this beautiful church is well worth a visit.

Why You Should Visit:
To go on a great whistle-stop tour of the history of Germany that really puts both its successes and failures into perspective.
The descriptions are in German, but the free audio guide (English/French/German) is very clear; there are also tour guides, if needed.
The building itself is interesting too.