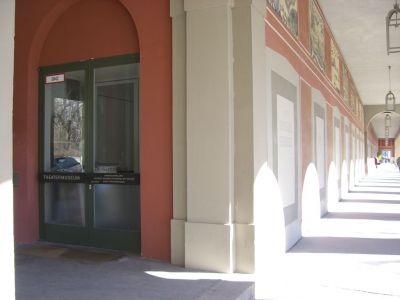 The German Theater Museum is dedicated to the history of theater in Germany with a special focus on Bavaria and Munich. The Museum’s collection is displayed through themed exhibitions that keep changing periodically. The first permanent exhibits of the German Theater Museum were the private collection of actress Clara Ziegler. The museum opened in her villa near the English Garden in 1910, one year after her death. The building was badly damaged during the World War II bombardments. The collection was moved for safekeeping and survived the ravages of war. In 1953, a new Museum was opened in the Old Electoral Gallery that dates back to 1781.

Exhibits at the German Theater Museum include portraits of well known German actors and actresses, stage props, costumes, photographs, and theater masks. It also has an impressive document collection consisting of blueprints of theater building plans, stage set sketches, costume designs, manuscripts, production scripts, reviews, sound recordings and letters. The library has over 80,000 documents including music scores, librettos, theater journals and works of secondary literature. The Münchner Spielplan or Munich Repertoire is a unique service offered by the museum. It provides information on performances currently taking place in all the theaters in the city.

Why You Should Visit:
Always interesting changing exhibitions on German and Munich theater history and the Hofgarten park just next to the museum is a marvelous place.

Tip:
On the odd occasion, they play live music on the grounds in the dome where everyone joins in to dance. There are also restaurants and locals playing games, etc... The atmosphere is contagious.

Graggenauviertel is one of the four quarters of Munich Alstadt. The gentry preferred to reside here, probably because of the proximity to the Alten Hof. Take this tour to admire the beautiful landmarks and famous cultural venues, explore the specialty shops and relax in a bar.

Munich can be a hotspot when it comes down to a thrilling night out. Munich has many entertainment venues, especially industrial areas that have been reconstructed into funky nightlife zones. The nightlife here is as exciting and lively as in other parts of the continent. Be it beer gardens, dance clubs, a classy late night or hip-hop, Munich has something to suit every mood. This guided tour...  view more

The Lehel is regarded as "the oldest suburb" of Munich. It is home to The State Museum of Ethnology, the second largest collection in Germany of artifacts and objects from outside Europe, the Bavarian National Museum and the adjoining State Archeological Collection, the Schackgalerie - an important gallery of German 19th-century paintings and the Englisn Garden.

Maxvorstadt is a central borough of Munich, located north-west of the Old City. The area is home to a number of educational institutions, including Germany's top two universities - LMU and TUM, hence the area's nickname - the "Brain of Munich". Several museums and art galleries are found here as well, along with a number of historic personalities who marked the area with their...  view more

Museums in the Bavarian Capital

The city of Munich has several museums that are a veritable treasure trove of information ranging from empires, the animal kingdom, plants and paleontology to the arts, crafts and the music. The city’s museums attract millions of visitors every year. Whether you are an art aficionado or want to experience Bavarian culture through the ages, there is something for everyone in the several museums...  view more