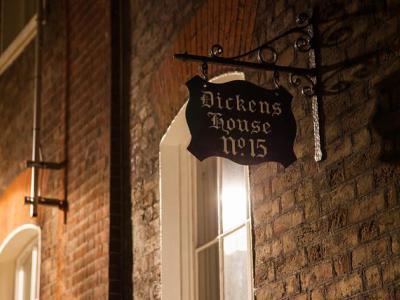 Built in 1720 and named after Thomas Tooke of London Esquyre, Dickens lived here during his time as a parliamentary reporter. It is said to be the place where the writer created the character of Ebenezer Scrooge in "A Christmas Carol" which was reputedly based on his tight-fisted neighbor.

In the novel "Bleak House" the place was renamed Cook’s Court and was the office of the meditative law stationer Mr Snagsby who "dealt in all sorts of blank forms of legal process, in skins and rolls of parchment, in paper - foolscap, brief, draft, brown, white, whitey-brown, and blotting; in stamps, office quills, pens, ink, India rubber, pounce, pins, pencils, sealing wax and wafers; in red tape and green ferret; in pocket books, almanacks, diaries and Law lists; in string, boxes, rulers, inkstands (glass and leaden), penknives, scissors, bodkins, and other office cutlery." He was "the high standard of comparison among neighboring wives, a long way down Chancery Lane on both sides.”
Image by Tom Page on Flickr under Creative Commons License.