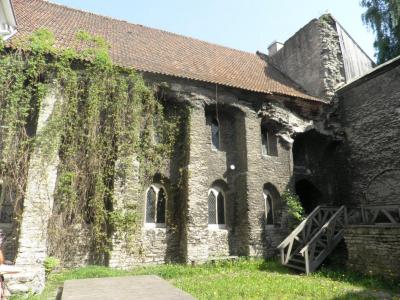 The Dominican Monastery Claustrum is located in the Old Town of Tallinn, not very far from the Viru Gates, which are the official entrance into this part of the city. The Monastery here was first formed in 1246, during a time period when the city was a thriving.

From a historical perspective, the building is one of the most important in all of Tallinn. The clausure holds the most important rooms in the old building, and they were used for many purposes during the years. During the 14th and 15th Century, the meetings of the leadership of the Hariju and Virumaa Knighthoods took place here. The Old Capital Hall used to be here also.

One of the first libraries in Tallinn was also located inside the Monastery. In addition to being able to see the old library, you can visit the old sacristy, vestry, and dormitories used by the monks and leaders of the city.

There is an extensive collection of medieval and Renaissance art and artifacts to be seen. You will especially want to check out the stone carvings, particularly those on some of the old tombstones. The relief of the angel, set in a triangle, is also quite stunning and was designed by Arendt Passer. He was a famous stone mason who did other work in the area, like the Pontus de la Gardie in the famous Tallinn Cathedral.

Just to the south of the monastery lies a narrow alley that is known as Catherine’s Passage. The wall here was from the original Monastery. There is a series of craft shops where you can watch artisans at work, just as in the days gone by.
Image Courtesy of Wikimedia and Flying Saucer.